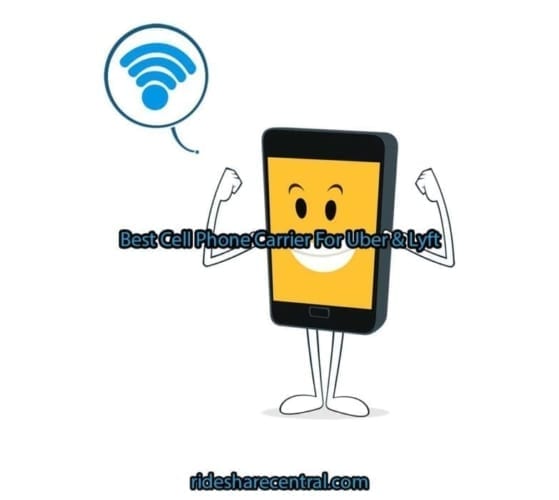 Selecting A Cell Phone Carrier for Uber or Lyft driving

A good cell phone plan is essential if you’re going to Drive With Lyft, Uber, or another on-demand service. The three main factors to consider when selecting your cell phone carrier are price, network coverage, and the data plan. If you’re full-time, you’ll want a plan with a minimum of 4 gigabytes (really 5GB to be safe) of data. If you’re part-time, figure on using about 1 gigabyte of data for every 50 hours driven. These are rough estimates. Luckily, many carriers now offer unlimited data.

When it comes to price, if you drive for Uber or Lyft, you’re eligible for discounts from certain wireless carriers. In terms of network coverage, all four of the largest wireless carriers have pretty strong networks at this point. However, all the major carriers also still have some dead zones outside of major metro areas. This is something to keep in mind since you’ll occasionally get a really long (60 miles+) ride that takes you out of your metro area. If you drive in an area where you get a lot of rural trips, AT&T or Verizon may be a better choice because they have better coverage outside major metro areas than Sprint or T-Mobile.

We’ve looked over the four largest wireless carriers in the U.S. and listed the pros and cons of each for Lyft and Uber driving. We haven’t ranked the carriers because the level of cell phone coverage varies from city to city. WhistleOut has a list of which carrier has the best network coverage in each state. However, while Verizon and AT&T have the best networks in most states, that doesn’t mean that they’re the best choice in your city. Even though Verizon has the highest ranked network nationally, Sprint or AT&T may be a better choice in certain cities. The time tested way to find out who has the best coverage in your area is to ask some people in your town. A good person to ask may be your next Uber or Lyft driver.

Sprint’s plans include unlimited talk, text and data. While their national coverage area is the smallest of the big four carriers, they still cover 93% of the country. If they have good coverage in your area, Sprint is an excellent choice, especially if you need to have multiple lines on your wireless account. They offer incentives for switching and have the best per line rates of the major carriers.

Sprint is currently offering Uber driver partners $100 for each line they transfer to sprint. Drivers can receive a maximum of $300 if they transfer 3 or more lines to Sprint. Sprint also has a special discounted price of $19 per line (up to 5 lines) for Uber drivers.

AT&T has 2 types of unlimited data plans – unlimited choice ($60/1 line) and unlimited plus ($90/1 line). The lower priced plan limits data speed to 3Mbps, but that is more than sufficient to do rideshare. If you need multiple lines, you can get 4 lines on the unlimited choice plan $160 per month. These prices are with paperless billing and autopay enabled. They also have shared plans, but those plans include per device access fees of $20, which makes the unlimited plan the better deal. These prices don’t include taxes and fees.

Driver Discounts: Uber Only
AT&T has some of the best discounts available for Uber drivers. They are currently offering Uber drivers 20% off service plans, and a $650 device credit if you’re switching to AT&T. They also offer an extra 1GB per month if you choose a shared data plan.

Verizon recently launched unlimited data plans on both single and family accounts. Before the driver discount, the unlimited data plan for a one line account runs $80, or $140 for two lines. Alternatively, a driver could get an 8GB shared plan (multiple lines) for $70. However, Verizon also charges $20/month per device for “line access” on shared plans. So, if you go with Verizon, you’re better off with an unlimited data plan.

Driver Discounts: Lyft & Uber
Verizon currently offers both Lyft and Uber drivers 15% off their monthly bill (including family plans), and 25% off certain accessories.

T-Mobile’s unlimited data plan is called T-Mobile One. You can get one line on this plan for $70 per month, including taxes and fees. They offer discounts the more lines you add. For three lines, the monthly cost drops to $47 per line per month.

Driver Discounts: None
For some reason, T-Mobile doesn’t offer driver discounts. They have a rider promotion going with Lyft, but no driver promotions on either platform.

Previous Post: The Best Cars For Uber And Lyft

Next Post: How Much Do Uber and Lyft Drivers Make in NYC in 2017?

How Much Do Uber & Lyft Drivers Make?