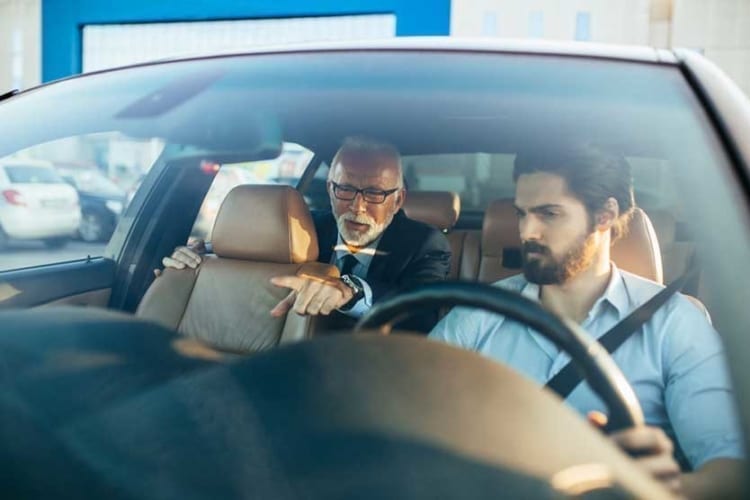 While working as an Uber or Lyft driver, chances are that most of your passengers won’t give you any trouble. The average passenger will strike up casual conversation with you or entertain themselves while you drive them to their destination. Unfortunately, like any customer service job, you may encounter the occasional unexpected upstart that could threaten your day with unruly or unlawful behavior.

The best thing you can do as a driver when handling these passengers is to try and be prepared ahead of time, and to stay calm. If you’re knowledgeable on how to handle some of the more common problems drivers have with riders, you should be able to breeze through even the most unruly of passengers. Below, we’ll take a look at some of these typical legal issues and explore how we as drivers can mitigate the fallout from an otherwise problematic situation.

My Passenger is Underage

While sometimes overlooked by new drivers, there is a clear rule in most cities that drivers are not permitted to take unaccompanied minors in their car. That means that you are absolutely not allowed to transport anyone under the age of eighteen, something that is reiterated on both the Uber and the Lyft website. In fact, both rideshare companies refuse to allow users to make a new account without confirming that they are above the age of eighteen. In reality though, both Uber & Lyft have many underage riders on their systems.

The reason is that it’s relatively easy for minors to circumvent the no minor rule. By using a parent or a friend’s account, minors can request rides and often it’s impossible to tell until you arrive for the pick-up. These rides aren’t always malicious – I encountered busy moms just trying to ship their kid off to school more than once – but legally, it’s still inappropriate to accept the ride.

The best response in this situation is to explain the law and request the rider cancel their request voluntarily. If they refuse, you can instead cancel the ride yourself. For Uber drivers, select “unaccompanied minor” from the prompt of reasons you’ll receive in the app. It shouldn’t take long before you receive a cancellation fee credit. If, for whatever reason, the “unaccompanied minor” choice doesn’t appear on the list, select “no-show” instead after five minutes have passed and shoot an e-mail out explaining that the rider was a minor.

For Lyft drivers, you’ll have to call the passenger, cancel the ride, and then email Lyft to explain why you canceled. They typically respond quickly and will issue the cancellation refund within the day.

Driving an infant or a toddler around without a car seat can be a major hazard for the child’s well-being, and is pretty much illegal in every city. For this reason, riders are always permitted to bring their own car seat along and install it within their Uber or Lyft car to safely transport their child from one location to the next. However, not every parent has the foresight to do this, and you may be faced with someone attempting to bring their child on board without a car seat. I’ve encountered this a number of times, but you can bet I canceled the ride rather than put the infant’s life at risk.

If you should encounter a parent without a car seat, you can and should decline driving them unless they are able to secure a car seat for the ride. As always, ask your passenger to cancel the ride themselves. If they refuse or give you a hard time, cancel the ride yourself. For Uber drivers, select the appropriate option from the prompt screen if it’s available. For Lyft drivers, cancel and then email Lyft to explain the circumstances.

My Passengers Are Over the Legal Number of Passengers

It’s a pretty common sense rule, but Uber and Lyft both clearly state that you may only allow as many passengers in your car as there are available seatbelts. You are not permitted to cram extra bodies into your car for the sake of being frugal or traveling together. It creates a pretty dangerous scenario for everyone involved, greatly increasing your chances of getting into an accident while driving.

If this happens, inform your passengers that you can take only as many people as you have seatbelts, and have them request a second ride for the rest of their party. If the group isn’t too large, they can also attempt to cancel their ride and request a larger vehicle from the app. If your riders won’t accept either option, cancel the ride yourself.

As above, for Uber drivers you can select “too many riders” once you’ve canceled the ride, and for Lyft, you’ll have to cancel and then email to explain the situation.

My Passenger Is Harassing Me

Harassment can come in many forms, none of which are acceptable when working as a rideshare driver. While rare, you may encounter passengers that will test you with unwelcome sexual advances, uncomfortable conversation, or belligerent threats of violence. It’s hard to predict which passengers may turn out to be problematic once you have them in your car, but just because you’ve accepted the ride doesn’t mean you’re totally helpless.

If you feel threatened by your passenger in any way, pull over to the side of the road and request they exit the car immediately. Do your best to be polite, so as to avoid encouraging further aggressive behavior, but be firm enough in your control of the situation. If necessary, you can escalate to involve law enforcement, but it’s pretty rare that a situation with a passenger will make it to that point. A number of drivers have started using Google Hangouts (or similar apps) to stay in touch with each other while on the road. If you encounter a situation that makes you uncomfortable, in addition to the actions above, you can quickly send a short message to the group with your location.

Once you’re safe, the passenger is removed and the ride is complete, contact Lyft or Uber to let them know what happened. In most cases, they will make sure you are never matched with that rider again to avoid further problems. In extreme situations, they may remove the rider from using their service entirely, but that is up to Uber or Lyft’s discretion. Usually, unless you involve the police, the troublesome rider will not be removed from the system. This is a troublesome aspect that both and Lyft and Uber need to address.

Have you had a troublesome experience with a passenger? Let us know in the comments below.

Next Post: Nail that Five Star Uber Or Lyft Rating Every Day

How to Reap the Rewards of Uber & Lyft Driving

Tips For Driving Lyft Or Uber On Halloween