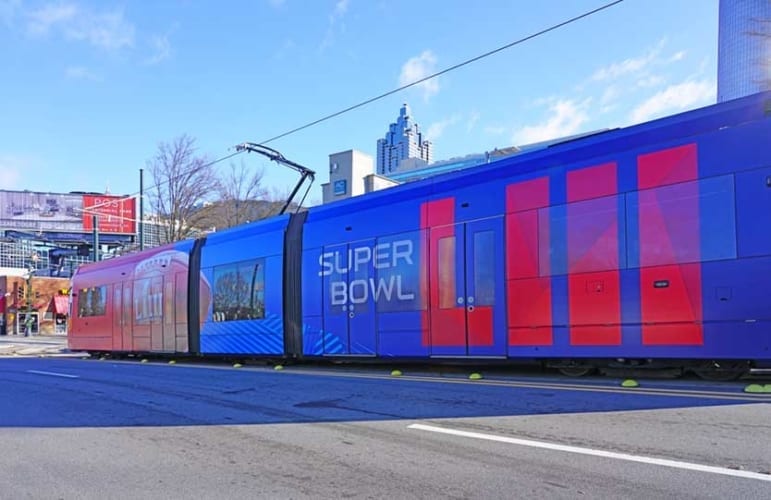 It’s no secret that major sporting events and concerts can make for a lucrative Lyft or Uber shift. When 75,000 people try to leave a concert at the same time, there’s going to be a heavy demand for Lyft and Uber drivers.

While the spike in demand from a regular Braves game often lasts less than an hour, Super Bowl week in Atlanta should provide an overall increase in demand for most of the week before the game.

Atlanta expects more than 1 million people will visit the city in the week and a half before the Super Bowl this year, with about 150,000 guests packing into the city the weekend of the big game.

Overall demand for Lyft and Uber drivers is likely to be as high as it has ever been in the city. Atlanta Deputy Police Chief Scott Kreher had the following suggestion for those attending the SuperBowl in Atlanta

“MARTA, MARTA, MARTA, ride-share or your sneakers,” said Kreher. So, if you drive Uber or Lyft in the Atlanta area, you should expect Super Bowl week to be pretty busy, but the traffic to be worse than usual.

And although the city will be packed and rideshare demand high, it’s important to be aware of some things to maximize your earning potential and avoid some rookie pitfalls.

Be Aware Of Street Closures

Be sure to check out the Atlanta Super Bowl site road closures page to see the special Super Bowl detours and closures around Mercedes Benz Stadium and Centennial Park. Some closures have already started.

The road closures that will be in effect are listed below. 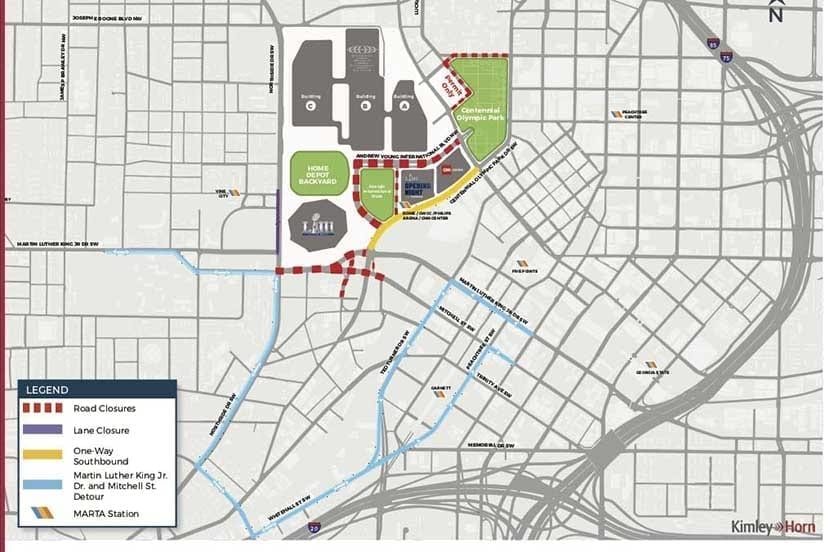 From Saturday Evening, February 2 through morning of Monday, February 4 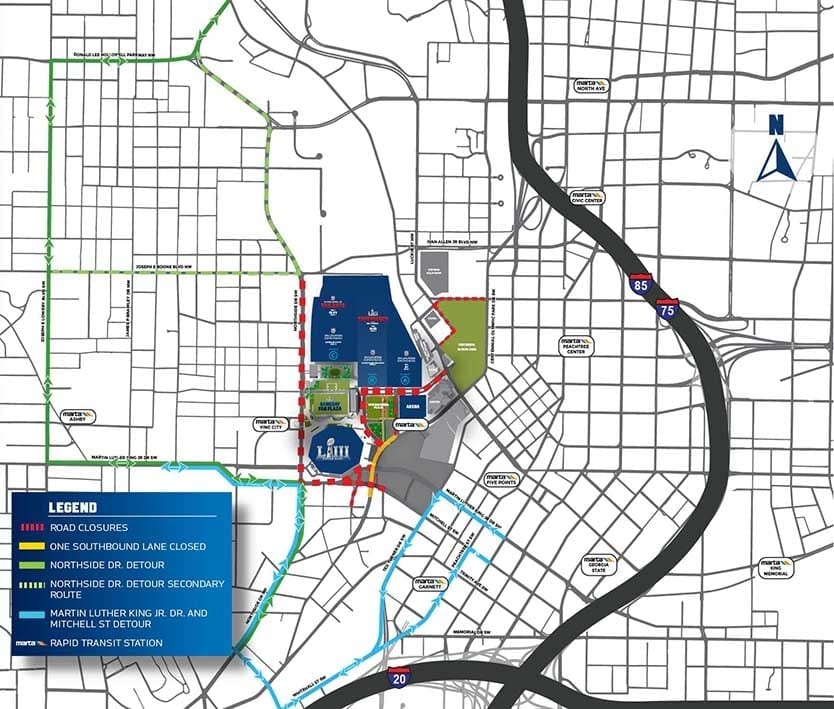 Starting January 26th, Uber & Lyft drivers should drop off and pick up their passengers on Centennial Olympic Park Drive, in front of the CNN Center.

On February 3 (game day), drivers will also be able to drop off (no pick ups) at the Yellow Lot, North of the stadium,

Both Uber & Lyft will likely run promotions and bonuses during Superbowl week. Expect a few hourly guarantees, quests and ride streaks in the week leading up to the game.

However, don’t chase the surge or prime time. Both companies will look to have a lot of drivers out on the road in the coming weeks. So, with the exception of right after the game, price surges will likely be high, but short lived.

And surge pricing and prime time aren’t what they used to be anyway. It’s better to concentrate on doing rides safely and efficiently, instead of shooting for multiple unicorn rides (and wasting gas in the process) that you may or may not get.

If possible, drive around the stadium and do a few rides before Super Bowl weekend, and certainly before game day itself.

Even though you may be familiar with the city, when a city closes major streets, and reroutes others, it can throw off even veteran drivers.

The Super Bowl is a mega event, and the weekend of the game, the area around Centennial Olympic Park will likely be as busy as it has been since the beginning of the rideshare era.

When you add to that multiple detours, as well as limited rideshare pick up and drop off spots, a little bit of advanced scouting couldn’t hurt.

Knowing how the road closures and detours around MB Stadium and Centennial Park are laid out will make for a smoother driving experience come the weekend. It also may allow you to scout out a few unofficial pick up and drop off spots that you can use on game day. Look for landmarks that passengers will be able to see (restaurants, hotels etc..).

Some veteran rideshare passengers have figured out it’s often easier to get picked up if they walk a few blocks away from a major event zone, say to the various hotels just east of Centennial Park. While you won’t be able to stop around there, the flow of traffic may be slightly better there, than right next to the stadium. 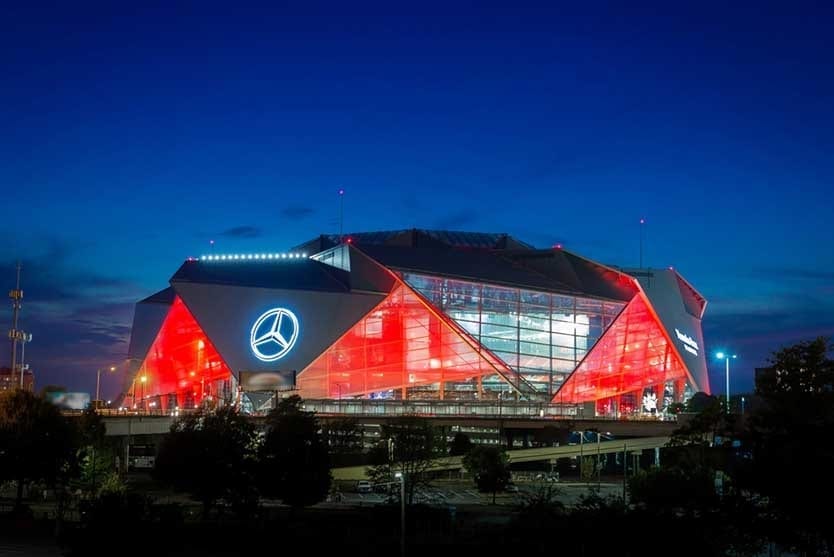 Hundreds of thousands of people are coming to the Atlanta area in the days leading up to the game. There will be parties all over town, and people will be going out in numbers.

Now, this doesn’t mean demand will be off the charts on Thursday, January 31st at 2pm.

What it will mean is elevated overall demand in the Atlanta market in the week before the Super Bowl, and of course the day of the game.

And don’t forget about the Foo Fighters concert at Atlantic Station the evening before the game.

Driving Lyft Or Uber The Day Of The Super Bowl

Except for the parts that specifically reference Atlanta, this advice could apply to driving in most markets on Super Bowl Sunday in 2019.

Expect demand to start rising in the late morning (after 9am). Ride requests will likely come from the all over the city and burbs as people make their way downtown if they’re lucky enough to have a ticket, or more likely, to their friends house to watch the game. Unless you have a dropoff at the Super Bowl village itself, avoid the area as it will be incredibly crowded.

Don’t worry, you’ll probably get rides taking you there anyway. However, getting out of the area once you’re there will be difficult because of the detours and closures.

If possible, you want to stay east of Centennial Olympic Park (Sono or Old Fourth Ward) when you’re waiting for rides near the stadium. It will probably be slightly easier to navigate traffic, but to be clear, the whole downtown area will be very busy.

Traffic will probably start to get worse as it gets closer to game time. If possible, during the week, scout out a couple of alternative drop off locations just outside the Super Bowl complex (a nearby hotel sometimes works).

Then, when you get a ride that drops off at the stadium, tell the passengers the traffic is pretty terrible at the Stadium, and suggest that they might get to the game faster if you dropped them off at one of the locations you scouted out earlier, that’s just a couple blocks away.

Use your best judgment as to whether to use this approach. Some passengers are going to want to be dropped off right in front no matter how long it takes!

Sunday mornings are often great times to drive anyway. There’s less traffic, and fewer Lyft and Uber drivers are on the road because many of them drove late the night before. Superbowl sunday should be no exception, but overall traffic should be slightly higher.

You can also expect to see a below average number of rideshare drivers on the road before 11am.

However, beware of super market runs where the customer asks you to wait. Lines will be pretty long at markets on game day. If you agree to wait, you could be sitting in a parking lot for 25 minutes for a 3 mile roundtrip ride – not profitable.

Through the afternoon leading up to the game, rideshare demand should be steady to above average, with rides taking you all over town. Bars in Buckhead, Piedmont Park, and other popular areas should be busy.

Be sure to check out our Atlanta Lyft & Uber Driver Guide for more hotspots.

Once the game starts, expect a lull. While you might get someone switching houses at halftime, this is the time to grab a bite, and maybe watch some of the game.

Consider using somewhere in Sono or Old Fourth Ward as your staging area at this point, and after the game. It will be easier to find a place or two where you can pull over in these areas.

After The Big Game

If you plan on picking up someone from the Stadium after the Super Bowl, be prepared.

It will be incredibly crowded, and you should definitely call your passenger as soon as the request comes in, and confirm their location.

Hopefully, your passengers are at the designated pickup spot in front of the CNN center. If they are, great, go pick them up. If they’re not, try and determine their location, and whether you can pick them up there, or if there’s a better location they should meet you at for a faster ride out of the area.

And don’t forget about the day after the Super Bowl. All of those out of town visitors have to get home. So expect loads of airport runs the Monday after the game.

Smart Tips for Integrating a Side Hustle into Your Life