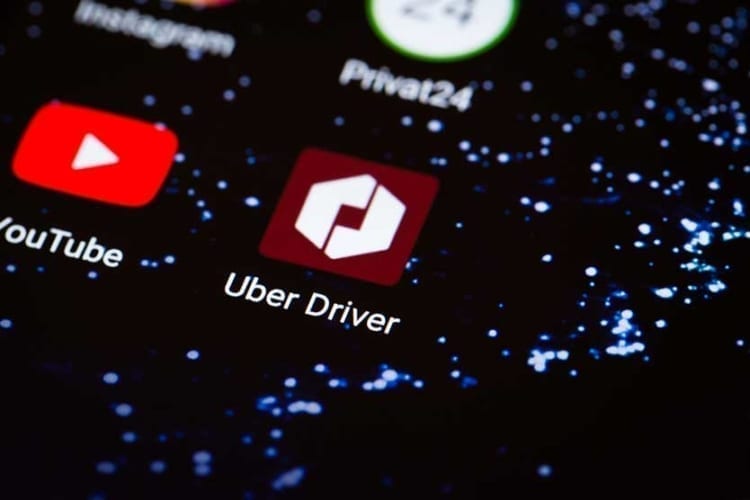 If you’re considering joining Uber, then you’re probably searching for an answer to this question: “How much do Uber drivers make? The answer is far more complicated than you might realize. Here, we break down the complexities of the equation to help you find answers. Find out more about estimating Uber driver pay, below.

How Much Does Uber Pay?

To answer the question, “How much do uber drivers make?” you’ll need to consider three major factors:

Here’s a closer look at each of these aspects:

Before you can figure out your potential average earning as a rideshare driver, you need to first answer this question: “How much does Uber pay?” Let’s start by determining Uber ride fare. Here are the four major components that determine how much an Uber rider will pay:

If there is a boost in demand at the time the Uber is ordered, they’ll also pay surge pricing, which multiplies the total fare minus the booking fee. However, the rider’s total payment doesn’t go into the pockets of the Uber driver.

Firstly, the booking fee automatically goes to the rideshare company to cover various internal costs. Taking it out of the fare scenario, you’re still left with the base fare, per minute charge, and per mile rate. After adding these three together, Uber takes a 25% commission out of the total. The rest is Uber’s driver pay.

Keep in mind that the style of Uber ride will affect your potential pay. You’ll make less for an UberX trip than you will providing UberXL or Uber Black SUV rides. The per mile and per minute rates are significantly higher for those vehicles.

One of the biggest fluctuations in rideshare driver income is tips. The company’s commission rate doesn’t include the tips you earn as a driver, so you get to include all of your tips in your take-home pay. If you practice excellent customer service skills, you’re likely to increase your average hourly earnings far above the local average. Top drivers can increase their weekly pay 10-20% thorough Uber driver tips alone.

The main reason that Uber’s suggested hourly average doesn’t match that of the study is expenses. Rideshare drivers operate as independent contractors, so they’re responsible for all the expenses associated with driving for hire. Some of the most common out-of-pocket costs for Uber drivers include:

When combined and averaged out, your total expenses will reduce your average earnings.

Another reason Uber’s suggested hourly average doesn’t match up is that they’re providing a gross income amount, which doesn’t factor in rideshare taxes. Managing this is one of the most challenging tasks for Uber drivers. As an independent contractor, all federal, state, and local taxes are your responsibility.

So, on top of covering your own expenses, you’ll also need to calculate and pay income tax as well as social security and Medicare tax. To determine your potential net income as a rideshare driver, you’ll also need to factor in the required taxes and set them aside every payday. This process further cuts into your overall earnings.

However, there is a silver lining. While you will need to pay your operating expenses out of pocket, you can deduct all or a percentage of each on your taxes as a business expense. This process will reduce your overall tax liability, which can lower your estimated quarterly tax payments throughout the year. To make this process easier, use an expense and mileage tracker to maintain thorough documentation throughout the year.

How Much Do Uber Drivers Make?

Now, you know what plays into ride fares as well as the operational expenses and tax requirements of Uber drivers. Together, these three elements affect the overall Uber driver pay average. Yet, the total of each of these categories is very location-specific.

Uber sets their fares based on the city in which you drive, and your average expenses are also affected by regional variations, such as fuel and vehicle maintenance costs. While federal tax percentages are the same everywhere in the U.S., the state and local tax percentages vary by location.

Here’s an example of what you can expect to earn as a driver in New York City:

Taking in these costs into consideration, the Uber fare estimator calculates that a 30-minute trip from the Tenement Museum to the Central Park Zoo would cost $23.71 without a booking fee. To determine the driver’s earnings, you’ll multiply the fare estimate by .75, which results in $17.78. Multiply this trip by two—since it’s a 30-minute trip—and you’ll average $35.56 per hour. However, you’ll need to subtract around 30% (approximately $10) for taxes, which results in around $25 per hour. While this amount is similar to Uber’s suggestion, you’re not done with your calculations yet.

Additionally, you’ll need to subtract your average hourly expenses. For argument’s sake, let’s say that you spend $420 per month on your vehicle payment, $280 on your car insurance, $100 on maintenance, $150 on fuel, and $50 for smartphone service. That averages out to look like this per hour:

Now, subtract the expenses of $4.11 per hour from your net (post-tax) income of $25.56 and you end up earning $21.45. This estimated hourly wage is still close to Uber’s own marketed driver earning potential, but it also envisions that’ll you’ll score back-to-back rides with little to no wait time. Such variables make estimating Uber driver pay a complicated process.

How Much Will My Uber Driver Pay Be?

For years, the rideshare company has claimed that drivers can make up to $25 per hour. However, one trusted study puts the national average at just under $16 per hour.

Why is there such a drastic difference? Much of it has to do with which market the driver is in. While the national average for uber driver pay may be around $16 per hour, drivers in many markets can earn much more. If you’re in driving Uber in Los Angeles, San Francisco, or Chicago, $25 per hour is doable (although not all the time).

If you’re in Boise though, averaging $25 per hour driving for Uber is unlikely.

Another major factor that determines driver pay is experience. As you can see from the chart below, drivers earn substantially more after completing their first 100 rides. Earnings per hour tend to increase the more rides you do. 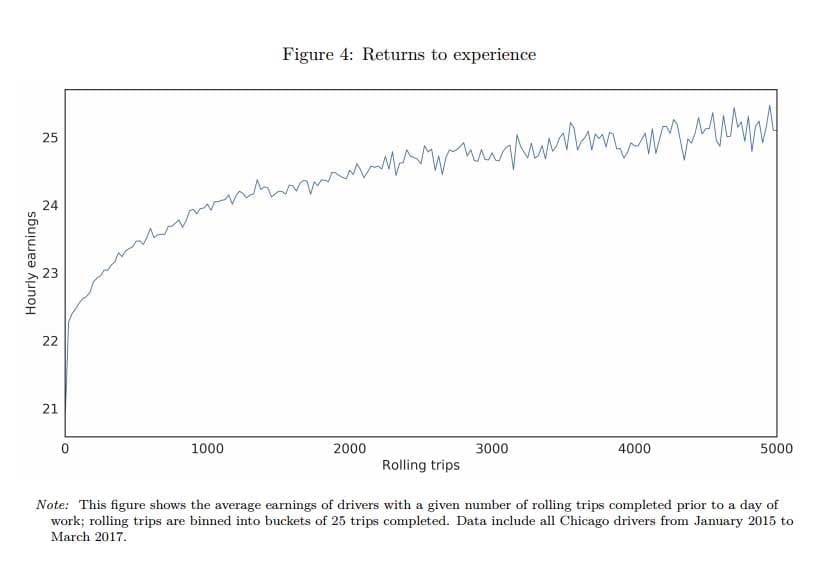 So how much can you expect to make when you start driving with Uber? In most markets, you’ll probably make between $15 to $18 per hour as you start out.

If you’re in a market with more than 500,000 people, your earnings should increase to the $20 per hour range after a few weeks of driving. If you’re full time in such a city, you should be able to earn between $1000 and $1500 per week driving UberX, and more on the premium Uber platforms.

Pretty much every Uber driver makes more money per hour in their third week of driving than their first week.

Here’s what a some drivers have earned recently on Uber. 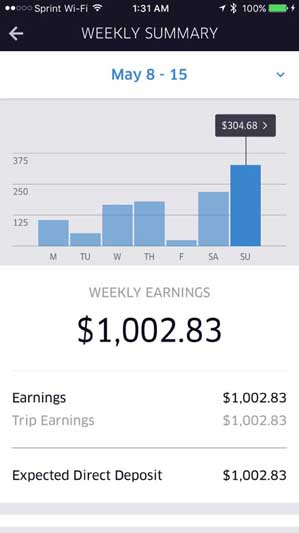 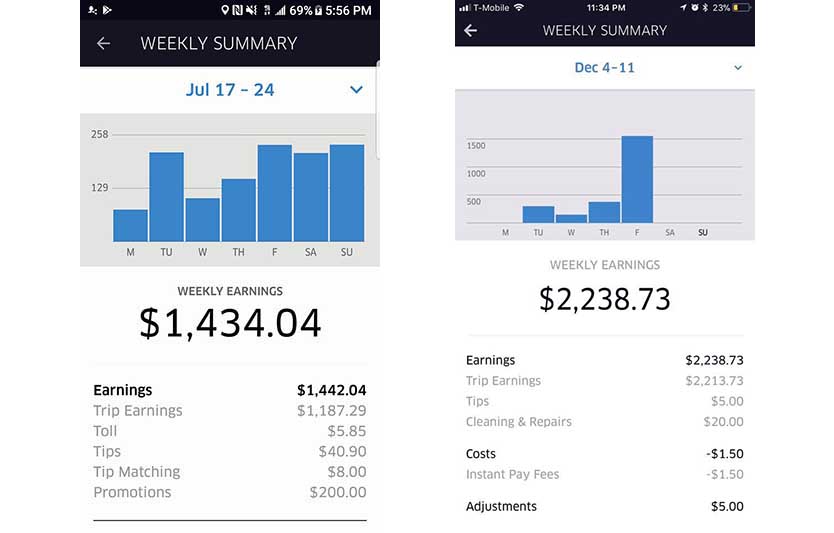 How to Boost Your Uber Earning Potential

With all of this information, you’re probably wondering what you can expect to make as an Uber driver. While Uber’s suggestions and the study mentioned above are drastically different, drivers that have provided their earning information to Glassdoor seem to fall in the middle range at $14 per hour on average.

As you can see, answering the question, “How much do Uber drivers make?” isn’t as easy as most people imagine. There isn’t a precise method to estimate your individual income as an Uber driver. Every location differs on pricing, and the demand will fluctuate daily to affect your overall average. However, you can utilize insider tips and tricks to get ahead and make the most of your time on the road.

At Rideshare Central, we offer a growing number of helpful guides, how-tos, and tool reviews to assist you with becoming a top rideshare driver earner. Here are a few to get you started:

You can get an Uber sign up guarantee of up to $2000 by using our Uber driver referral code (i9tz1) when you sign up to drive. Simply click the button below to get started.

Previous Post: Lyft Application Guide: What You Need to Know

Next Post: The Lyft App: Your Guide to the Revamped Lyft Passenger App