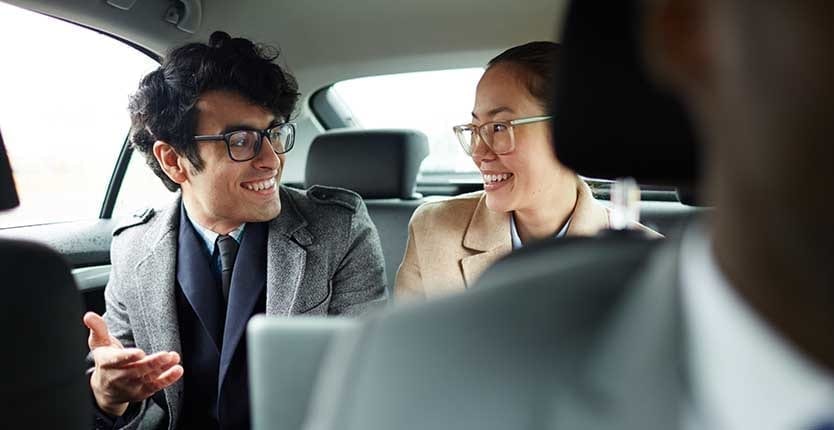 Uber and Lyft drivers spend a lot of their time worrying about their rating and its maintenance – for good reason! Too many bad ratings can lead either Uber or Lyft to deactivate a driver. While it depends on the market, if a driver has a rating of 4.6 or below, they’re usually at risk of deactivation. Moreover, since the rating is one of the first things a passenger sees, most Uber and Lyft drivers try to keep their rating as high as possible.

After all, a poor rating can seriously ding a driver’s overall rating. This is especially true if you’re a part-time driver. Even worse, it’s often difficult to raise a poor rating on Uber. They use an average of up to a driver’s last 500 rides to determine a rating. On Lyft, it’s a bit easier, since Lyft only averages the past 100 rides. In any case, both the Uber and Lyft rating systems leave drivers with a lot of concern about meeting their passenger’s expectations.

The good news is that drivers aren’t the only ones who have to maintain a rating through Uber and Lyft. Both rideshare companies have implemented a two-way rating system to help make sure that both drivers and riders are held accountable for misbehavior, such as being impolite, messy, or doing anything that might make the other person feel unsafe. At the end of each trip, drivers also get the opportunity to rate their rider. A bad rating for a rider comes with its own set of consequences, like not being able to find a driver who’s willing to accept your trip the next time you’re looking for a ride! Most Uber and Lyft drivers are loathe to accept a ride request from a passenger with a rating below 4.7.

If you’re not sure what your rating is as a rider, it’s pretty easy to find out. If you are an Uber user, simply open the app and swipe over to the menu. Beneath your name and portrait, you’ll see a number. That number is your current rating between one and five stars. (Keep in mind that you won’t actually receive a rating until after you’ve completed at least five trips!) If you are a Lyft user, getting your passenger rating is a bit more old school. You’ll have to send an e-mail to Lyft support and ask them what your rating is. 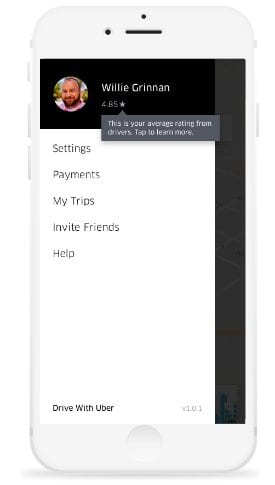 The Helpful Passenger, Or How To Get A Five Star Uber Or Lyft Passenger Rating

If you’re unhappy with your passenger rating, don’t fret! There are plenty of easy ways to improve as a passenger, and a few key things that most drivers agree greatly influences how many stars they give to their riders.

There’s a lot that a rider can do on their end to ensure their initial pick-up goes over smoothly. For starters, never keep your driver waiting. It’s bad practice to leave a driver idling outside of your home or a business. Not only are you infringing upon time that your driver could be using to make money with more trips, but it’s very likely that you’re forcing them to interrupt traffic or block parking locations while they wait. I encountered a few riders who left me blocking driveways or idling in no standing zones, or bus stops, way longer than I was comfortable with, just because they hadn’t finished getting ready to leave. 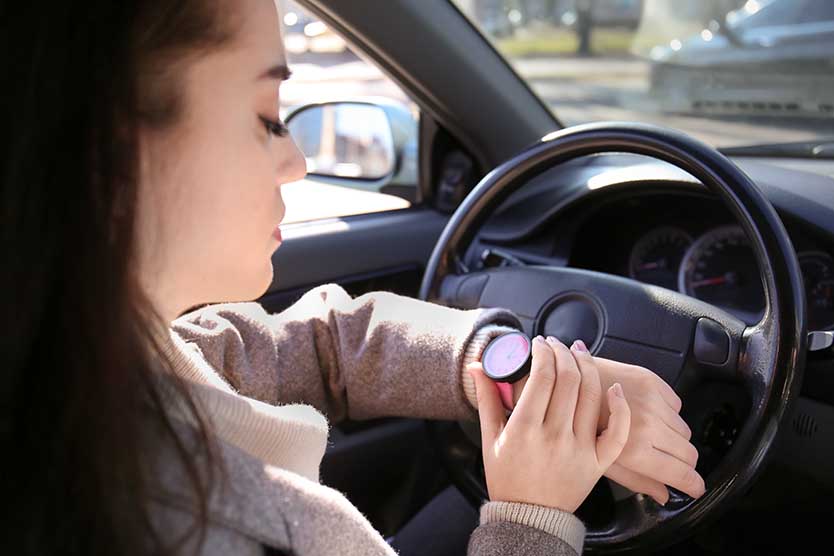 Her passenger is probably not getting five stars.

It’s important to restate how important being ready is. More than anything, Uber and Lyft drivers hate to be kept waiting. The reason is simple. Uber and Lyft pay almost nothing for wait time. So, if a driver is idling, they’re not making money. Say a driver gives twenty rides in a day, and ten of those riders keep the driver waiting for five minutes. Those riders cost the driver almost an hour, or about twenty bucks. If you multiply that across a whole year, you’re talking about thousands of dollars in lost revenue for the driver. So, be ready to get in the car when the driver arrives.

Wait In A Location Where The Driver Can Get To You

Another important thing to keep in mind is how accessible you are. If you know there’s no open space for your driver to reach you curbside (such as in a congested city, or in front of a fire hydrant), make an effort to move to somewhere more reachable. Uber and Lyft drivers are specifically instructed to never let a passenger into their car unless it is at curbside and safe, so do your best to make that as easy as possible for your driver. In most cities, drivers are not allowed to wait at bus stops, so keep that in mind as well.

If you are in a confusing parking lot or apartment complex, absolutely make an effort to contact your driver by text or phone to let them know where they can find you. There’s a good reason why Uber and Lyft allow you to make contact with your driver personally, so take advantage of that to clear up anything that might be confusing or misleading about where you dropped your pin!

This one should be a no-brainer! Always remember that even though it feels like a taxi cab, your Uber or Lyft driver is using their own personal vehicle to carry you from one place to the next. Be respectful of their space and do your best not to leave a mess on their carpets or seats. There are plenty of drivers who can share stories about passengers who have left trash, soda bottles, and food wrappers all over their car – and you can bet none of those passengers got a very high rating.

Don’t slam doors or damage the interior of the car, and you’re already on your way to five stars. Also, most drivers do not like when passengers eat in their car, especially if they don’t ask. If you’re starving, and just grabbed a wrap before you hopped in the car, ask if it’s okay to eat in the car. If the answer is no, respect that and wait until you’re out of the car.

In the same regard, if you feel yourself getting sick, tell your driver! It might be embarrassing, but a good driver should be more than understanding if you’re suffering a bout of motion sickness or if you’ve had a little too much to drink. They’ll be extremely grateful that you warned them and gave them time to pull over, or pull out a carebag (sickness bag), rather than getting sick all over the inside of their car.

Being polite is another key element of scoring five stars from your driver. You don’t have to go above and beyond with your conversation – it’s not a job interview, after all – but make an effort to be friendly and considerate. Avoid being rude, judgmental, or unnecessarily bossy with your driver, and they’ll give you an easy five stars.

If you want to all but guarantee your five stars, be friendly and tip your driver. It’s really that simple. Many drivers have actually adopted a system of giving low ratings to riders who don’t tip, so leave a buck, even on the short rides.

Above all else, never endanger yourself or your driver while riding in an Uber or Lyft car. Breaking the law by consuming any sort of illegal substance while in your driver’s car is a surefire way to get a one-star rating. It can also get you kicked out of the car on the spot! There is a zero-tolerance policy among drivers (and Uber and Lyft) for drinking in the vehicle. So, don’t force your driver into the uncomfortable position of having to reprimand you for something you shouldn’t be doing. If you’ve already been drinking, make an effort not to be especially rowdy or wild in any way that might distract your driver from paying attention to traffic. Also, never forget to buckle up!

Threatening, berating, or doing anything that might make your driver feel unsafe is another quick way to earn yourself a low rating. This also applies to ceaseless flirting or asking for personal information, which is greatly frowned upon by most drivers. Moreover, many drivers now have dash cams in their vehicles, so there’s a good chance your bad behavior will be caught on video. Because troublesome passengers have been an issue for a while, many drivers have taken to pulling over and calling the cops at the first sign of trouble. The bottom line is your driver is working, and they are not interested in being hit on by you. Don’t be this passenger.

Remember that your driver is just another person trying to do their job. Be respectful, polite, and thankful for the service they’re offering you. That should make it easy to keep up a five-star rider rating!

Previous Post: How To Drive Lyft Or Uber In Seattle

Signing Up to Drive for Uber or Lyft Over Winter Break

Look For These Features In Your Side Hustle Apps

Have You Considered Signing Up To Drive With Lyft? You Should.

Drive With Lyft in Gary Indiana.