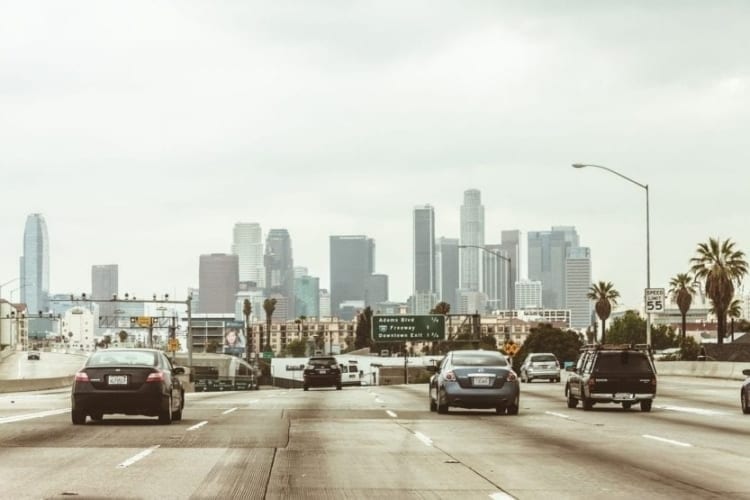 With Doordash, you can deliver by motorcycle, scooter, and in many markets, even bikes! And, no passengers!

Los Angeles is the second largest Uber & Lyft market in the United States. Both companies have been in town for years and have mature and busy operations. The Lyft sign up bonus in Los Angeles is currently $750.

Overall, L.A. is a great town for Uber and Lyft driving. However, because the market is so large geographically, and traffic so horrendous, it helps if you know the ins and outs of the city before you start driving.

Below are some tips on where, when, and how to drive for Uber and Lyft in Los Angeles. Hopefully, these will make navigating the L.A. Uber and Lyft driving experience a bit easier for new and veteran drivers alike. 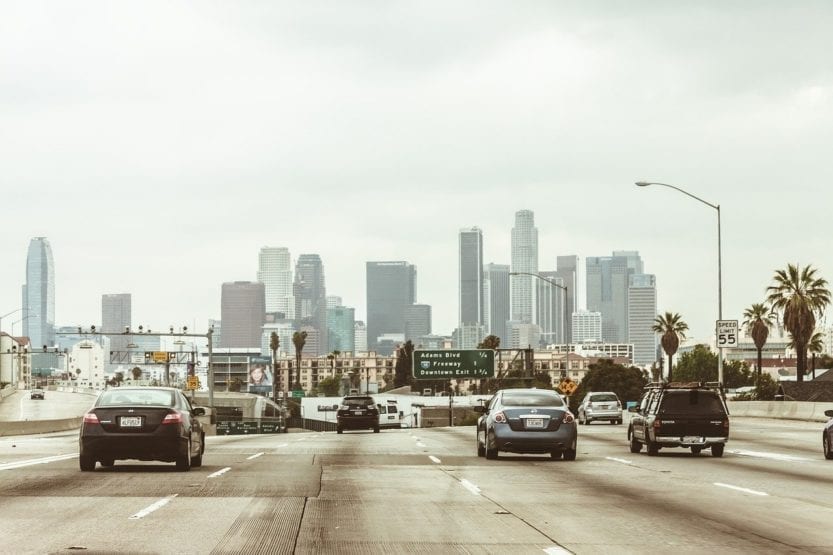 Where are the best areas to drive Uber or Lyft in Los Angeles?

If you’re driving Lyft or Uber in Los Angeles, the busiest and most lucrative areas overall are:

All of the areas above basically follow Wilshire Blvd and Santa Monica Blvd east from the ocean to downtown. More ride requests come from these seven areas (on both platforms) than any other parts of Los Angeles.

In general, if you’re near the hill dividing the valley from West L.A., you’re in a good area for ride requests.

However, there are many other lucrative areas in L.A. County when it comes to driving Lyft and Uber.

If you get a ride that takes you over to Torrance, for example, you might want to head towards the water. Then, head North towards Manhattan Beach and Hermosa Beach. You may get a request before you get to either, but if not, both areas are pretty busy on both Uber & Lyft.

On the other hand, if you get a ride that takes you to Northridge (San Fernando Valley), you’ll want to head South towards Encino. Then go east, which will take you through Sherman Oaks and Studio City, on the way to Hollywood. Being near the hill helps in the valley as well in the city.

In fact, a good rule of thumb for the San Fernando Valley is the closer you are to the hill, and to the studios, the more likely you’ll get a ride request.

One thing to keep in mind is that because L.A. is so large, you shouldn’t expect to stay in one area. While West L.A. is the most lucrative area, you will wind up all over Los Angeles. Driving Uber or Lyft in L.A. means you could get a ride going to Laguna Niguel, or Ontario, or even up to Big Bear. You just never know.

So, if you find yourself out in the boonies, you may want to use the destination filter to get you a request going towards West L.A. or Downtown. 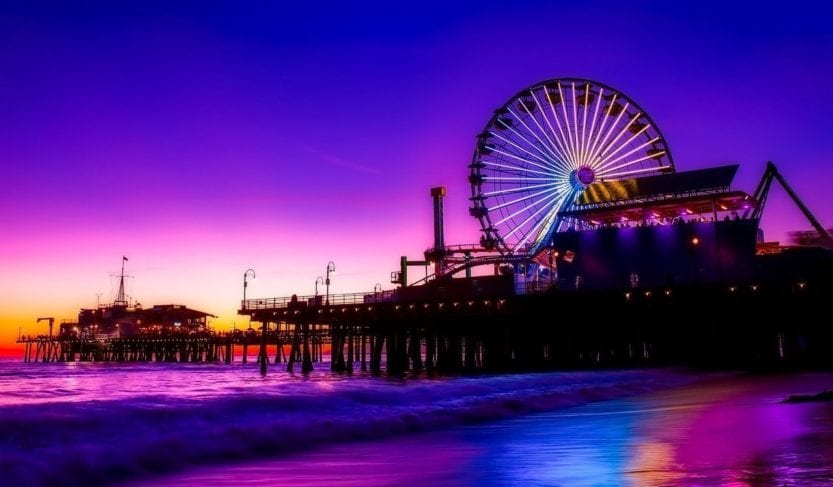 Also, not all of the areas listed above are busy all the time. If it’s primarily a residential area (Brentwood, Pacific Palisades, Malibu) it’s likely to only be busy during the morning rush, or on weekends.

When are the best times to drive Lyft or Uber in Los Angeles?

The best times to drive rideshare in L.A. are:

On weekdays, a good early bird strategy is to be close to the hill that divides West L.A. from the San Fernando Valley, by 5am. If you catch an airport run, you can get back to West L.A. in time for the rush. As with most markets, there are more airport runs on Mondays, Tuesdays, and Fridays. Alternatively, you may just catch a commuter heading downtown.

During afternoon rush hour, the best places to be are Downtown, Santa Monica, Century City, and Mid-Wilshire. However, much of West L.A. and Hollywood should be busy during this time.

Of course, weekends are the most lucrative time to drive either Lyft or Uber in Los Angeles. Early in the evening you can catch rides from the San Fernando Valley, South L.A., or Silverlake, going to West L.A. Once in the city, West Hollywood is the most lucrative hotspot.

Later in the evening, expect a fair number of requests around such locations as The Abbey (West Hollywood), No Vacancy (Hollywood), Los Globos (Silverlake), L.A. Live (Downtown), The Bungalow (Santa Monica), and Yard House (Marina).

On weekend mornings, Brentwood, Santa Monica, Beverly Hills, West Hollywood, Silverlake, and the North San Fernando Valley are prime spots from about 10am through 2pm.

Lyft vs. Uber in Los Angeles

Both are sufficiently busy in the Los Angeles market. However, Uber is busier in some adjacent areas like the Inland Empire.

If you plan on driving mostly in West L.A. and the valley, you can make comparable money on either Uber or Lyft.

If you’re thinking of signing up to drive in Los Angeles, keep in mind that Lyft still offers a sign up bonus ($400 – $700 recently). Uber only offers guaranteed earnings. Again though, you can probably earn comparable amounts on either Uber or Lyft in Los Angeles.

During busy hours, you can make $30 per hour driving Lyft or Uber in Los Angeles. However, it’s more reasonable to expect to make $15-$20 per hour when driving for Lyft or Uber in Los Angeles. As you learn your way around the city, you’ll become more efficient and should be able to earn $20 per hour or more consistently. Also, part time drivers who earn the most tend to drive during the busiest hours only.

Here’s how much a couple of full time drivers made in Los Angeles recently. Keep in mind that both drivers had to work a lot of hours to make this much. However, you can make this much on both Lyft and Uber in Los Angeles, if you’re willing to put in the hours. 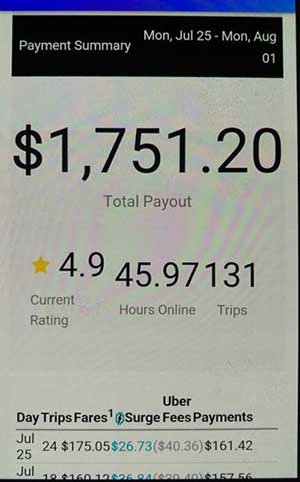 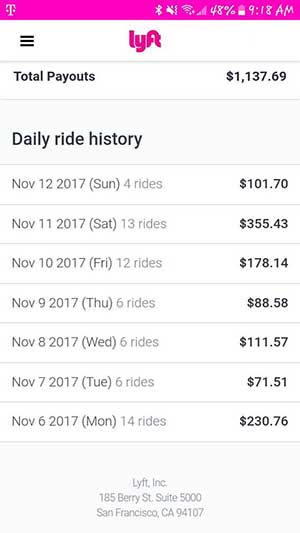 Los Angeles traffic is a beast. There’s no other way to put it. It’s also gotten worse over the last decade. Here’s a few tips to help make dealing with L.A. traffic a little easier when you’re rideshare driving. 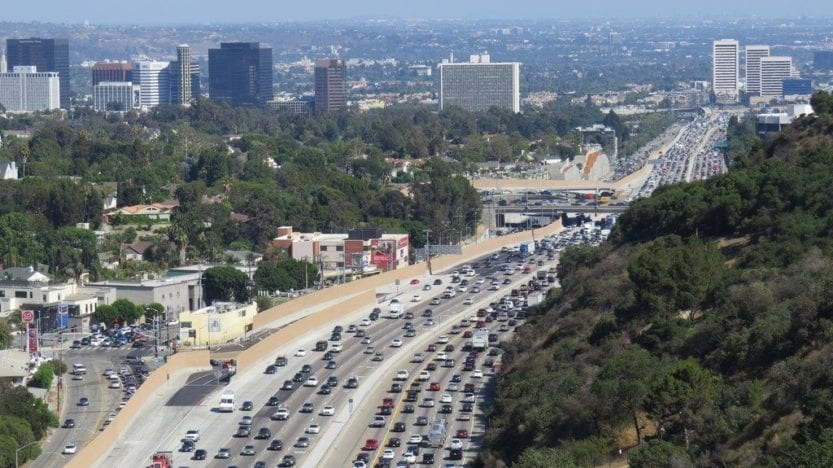 Follow Waze most of the time. Because so many people use Waze in Los Angeles, Waze’s time estimates and directions are usually (but not always) pretty accurate. Ignore it when it tells you to go through an alley, or tells you to get off the highway for one exit and then get back on. Other than that, it tends to work a little better than Google Maps, and far better than Uber’s built in navigation.

When headed downtown, Olympic & Pico are decent substitutes for the 10 if it’s really jammed. Also, you’ll want to learn the alternate street routes to LAX (Sepulveda and Centinela, for example) for the times when the 405 is a parking lot.

Since I mentioned the 405, learn the canyon routes from West L.A. to the valley, and vice versa. You should know how to navigate Beverly Glen, Benedict, Coldwater, and Laurel Canyons. Also, learn the shortcuts off of Mulholland (Calneva, Woodcliff, Roscomare) into the valley and the city.

If you’re trying to get to Hollywood or the 101 from West Hollywood, consider taking Fountain. Also, if La Cienega is jammed, you can take Crescent Heights part of the way.

If you drop off at LAX, make sure you’ve taken the LAX test.

Also, remember that you’re only allowed to display trade dress from one company at LAX. If you’re doing a Lyft dropoff, take your Uber sticker down, and vice versa.

Yes, the one trade dress display rule at LAX (and San Diego’s airport) is monumentally stupid. There is simply no reason for the rule. However, you can catch a big fine if you’re stopped while displaying both Uber and Lyft trade dress at LAX.

Also, if you get matched instantly with another passenger while dropping off at LAX, great. However, if you don’t get another request immediately, it’s usually not worth it to go wait in the lot. You can wind up there for over an hour with no guarantee of a long ride. Often, you’ll be better off just getting back on the road.

Is it better to sign up for Uber or Lyft in Los Angeles?

As noted above, both Uber or Lyft are pretty busy in Los Angeles. If you run both apps at once, you’ll probably see more Uber requests.

However, when it comes to earnings, drivers who are efficient and know their way around can earn $20 per hour or more on both platforms. Likewise, full-time Uber or Lyft drivers in Los Angeles can routinely earn over $1,000 a week.

Some drivers earn much more than that, but they’re usually putting in 60-80 hours per week.

It’s usually best to sign up for both Uber and Lyft. That way, you have two revenue sources. You’ll probably wind up driving more for one, but the best way to see which one you like better is to try them both.

Next Post: Is It Worth It To Wait In The Uber and Lyft Airport Queue?

Can I Refuse An Uber Or Lyft Passenger With A Service Animal?