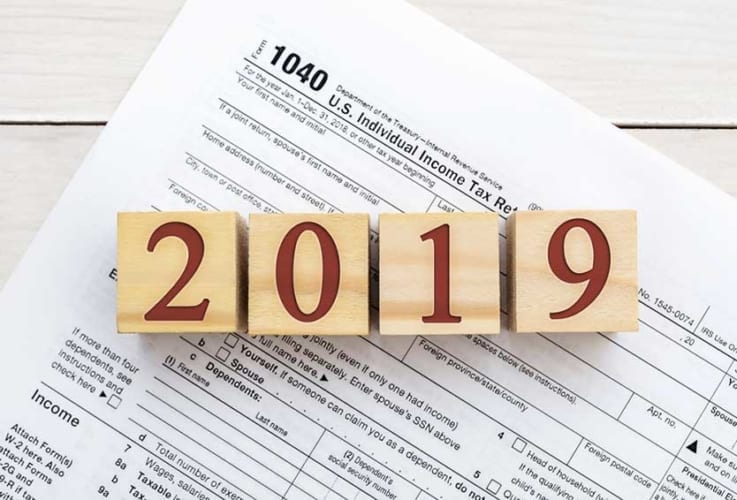 According to a number of recent studies, the gig economy has evolved in a wide variety of interesting ways over the last few years. This is including a few which likely could not have been predicted at the start. As of 2018 about 34% of gig economy participants in the United States were full time. A full 84% of them are doing so exclusively. That number equals about 47.8 million people in the United States alone.

This comes during a time when not only are corporations and Fortune 500 companies frequently outsourcing non-core tasks to gig economy workers. 47% of Millennials have embraced the freelancing culture. Experts predict that by as soon as 2020 about 50% of the United States workforce will be freelancers.

Taxes, the IRS and the Gig Economy

In a traditional employee and employer relationship, an employer will withhold taxes from every paycheck for their employees. They will also make contributions to Social Security as well. When someone participates in the gig economy, this doesn’t happen. The worker is responsible for all tax-related matters, including various self employment tax and withholding requirements.

Want to file your Federal and State taxes for free?

Check out Credit Karma Tax by clicking the button.

Credit Karma Tax® is a premium product that’s 100% free for everyone, from start to finish, for both federal and state taxes.

Recently, the Treasury Inspector General for Tax Administration issued a report about the importance of self employment taxes as outlined by the IRS. The IRS has an Automated Underreporter system, also known as the AUR, designed to help identify participants in the gig economy with discrepancies. It is designed to look at what they report on their income tax returns and what payments they actually received throughout the year on various 1099-K forms.

In an examination of the tax years 2012 through 2015, the report identified more than 264,000 different cases with potentially underreported payments. The data revealed that this was actually a problem that was getting worse over time. Underreporting increased a staggering 237% over the course of those four years.

While the program identified 264,000 discrepancies, nearly 59% were not moved through the system for further analysis. This was due to the sheer volume of potential issues that were being examined. The remaining 2,800 people who had potentially underreported their income for all four of those years. That total represents about $2.7 billion in underreported payments alone. 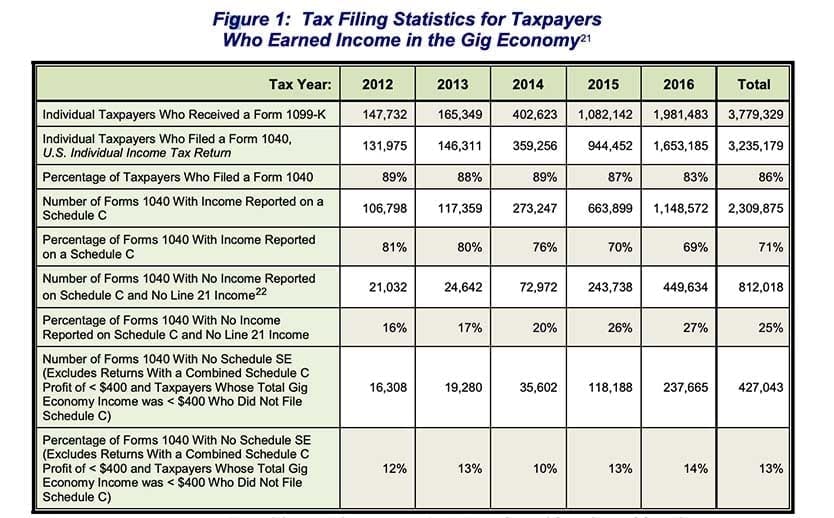 A large part of this has to do with how payments are handled in the gig economy. If a gig economy worker is paid via PayPal, they must receive over $20,000 in a single calendar year AND do so via 200 or more transactions. If they don’t meet or exceed both of those thresholds, PayPal doesn’t issue a 1099-K. This means that their income isn’t being reported to the IRS at all.

According to that TIGTA report, whenever income is not reported to the IRS, taxpayers are far more likely to be noncompliant. This is true both accidentally and intentionally. The first scenario could still land someone in hot water by way of late fees and other penalties. The second is actually criminalized and is punishable by up to five years in a federal penitentiary for prison and a fine of up to $250,000.

It’s true that the IRS has no intention of jailing over 40% of the United States workforce. But at the same time, they want their money.

The Treasury Inspector General made a series of recommendations to the IRS about how to best handle this issue moving forward. One of the biggest involved the development of a strategic plan to address tax administration for the gig economy. That plan should also create increased visibility into the collection and assessment of self employment tax as well. A soft notice program was also recommended, aimed at gig economy workers with repeated noncompliance issues.

TIGTA also recommended a significant expansion of the AUR program to account for a wider array of taxpayer situations. This was including those who have a long history of high-dollar discrepancies. The IRS disagreed with this recommendation. Officials said that their current system was fine and that adding more scenarios would ultimately add minimal value to what it was already doing.

11 recommendations were provided throughout the report and the IRS agreed with all but two of them. This was interpreted to mean that as an organization they are aware that this is an issue and they’re searching for opportunities to do something about it moving forward.

All of this means that the IRS is absolutely going to pay closer attention to gig economy workers over the next few years in particular. Most people operating under this system will have absolutely nothing to worry about, even if accidental discrepancies are identified. For the best results, gig economy workers need to:

These best practices will help make sure that gig economy workers have nothing to worry about. This is true even in the event of an IRS audit. They’ll be less likely to make mistakes in the first place. They can also prove that any that did occur were unintentional.

Previous Post: Tips for Renting Your Car Out on Getaround

Next Post: Some Lyft & Uber Drivers To Get IPO Stock, And Doordash Stays Private

Side Hustle Taxes: Learn The Ropes, Avoid Penalties, Save Money

Want a Side Hustle and a Full-Time Job? Key Things to Think About First