The New Lyft Driver App Will Streamline Pickups and Dropoffs

While most drivers prefer driving for Lyft, historically, Uber has had the upper hand when it comes to the driver app. Most drivers will tell you that the Uber driver app has been a bit more intuitive and easier to use. That may change with the new driver app that Lyft will be rolling out this summer. Lyft has been gathering driver feedback on the app for a while and made a number of changes last year. However, they’ve now completely revamped the driver app and will incorporate a number of features aimed at making the app easier to use. According to a Lyft spokesperson, “the entire experience had been updated for convenience and streamlined to reduce the number of screen ‘taps’ required by drivers to complete a ride.” Check out the following video to see what’s coming, and then keep reading for in depth screenshots and feature descriptions.

The Old Pick Up And Drop Off Experience

As you can see below, there are currently eight steps (eight screen taps) a driver must take to accept and complete a ride. This process has been the same for a few years now, and can seem a bit cumbersome. Also, at the end of the trip, you have to rate the rider immediately, a feature that has always been annoying.

The new Lyft driver app looks much cleaner, is easier to read, and reduces the number of steps need to accept and complete a ride to five instead of eight.

The first thing you may notice is that the pickup and drop off buttons are much better. The white lettering on a bold, rounded purple backround, is clearer than the flat rectangular buttons in the old app. Even better, Lyft has finally chosen to remove the second arrival confirmation screen. Instead of pressing “Tap To Arrive” and then pressing “Confirm Arrival” on a second screen, now drivers will just press “Tap To Arrive” and the rider will be notified. Lyft has also improved how a  driver contacts a rider. In the old app, you had to click away from the main screen to contact a passenger. In the new app, as soon as you accept a ride, a phone icon will appear on your screen. Simply tap the icon to contact your rider.

When dropping off, Lyft has also eliminated the second drop off confirmation screen. Another nice feature of the new Lyft driver app – rating your passenger is now optional!

The big change on the the ride request screen is that you can now decline a ride by tapping the “x” in the upper left corner. Before, you had to wait for the ride acceptance timer to expire. Having the ability to decline the ride immediately is an important addition to the driver app and the Lyft platform in general. It’s better for the driver, because he or she can immediately decline and become available to accept another ride. Having a way to decline a ride immediately will also improve the experience on the rider side because it will decrease passenger wait time.

Contacting passengers from the Lyft app has always been a bit of pain. For one thing, you had to leave the map screen to call a passenger. Even worse, after you clicked the arrow in the upper right, you still had to click, “Call Passenger”, and then confirm that you really wanted to call the passenger. That’s three steps a driver has to take to contact a passenger. When you’re on your way to a passenger and you’re in traffic, three clicks to make a call is cumbersome and unnecessary, not to mention, a  bit unsafe. In the new app, you tap the phone icon to call a passenger – much easier. 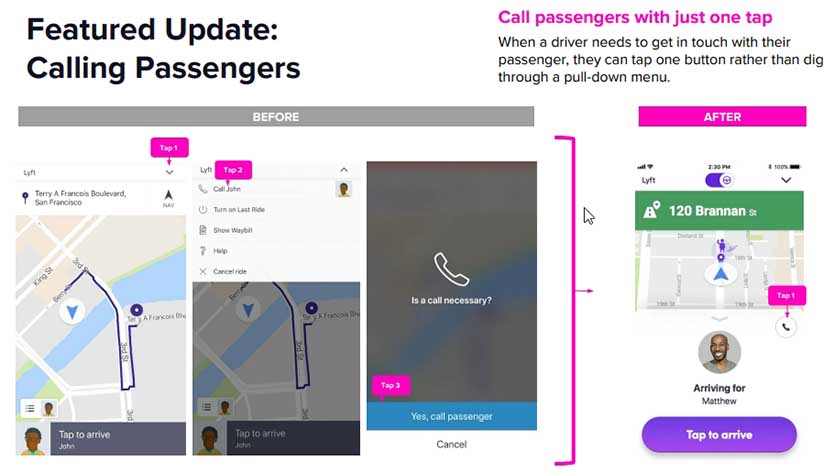 This is the first major update to the Lyft driver app in quite some time. Overall, it looks like Lyft has made a number of good improvements. The interface is cleaner and easier to read. The new font and icons look more modern, and the removal of the secondary confirmation screens should make driving for Lyft a bit smoother.

What do you think of the new Lyft driver app? Are there any additional improvements you’d like to see? Let us know in the comments below.