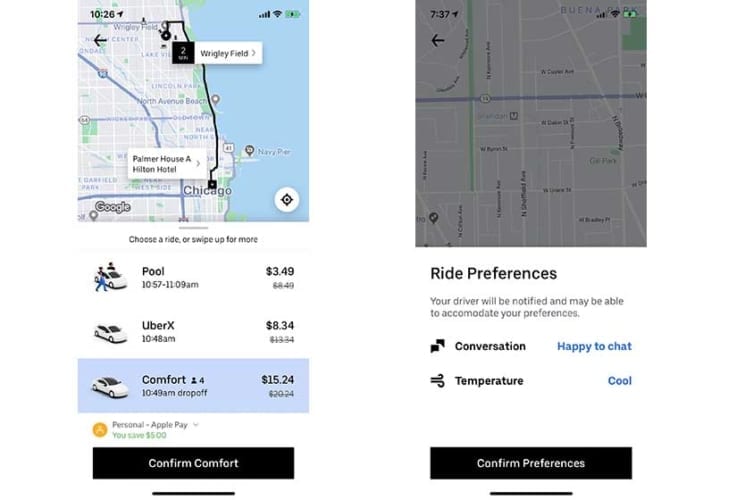 For the past few months, Uber has been testing a new offering called Uber Comfort in markets such as Arizona and New Jersey. While there were some issues with the rollout (Uber didn’t tell all the eligible drivers in the pilot area that they were launching a new service), it has proved a popular addition, especially for airport rides.

Now, Uber has expanded the Comfort option to 45 cities, offering riders willing to pay a bit more (~30%), an upgrade over a regular Uber X ride.

What Is Uber Comfort?

Uber Comfort offers newer model (2014 or later), mid-size cars with extra legroom, and the ability to tell the driver your ride preferences in advance.

If you order an Uber Comfort ride, your vehicle will be no more than five years old, and will feature minimum legroom requirements.

Your Uber Comfort driver will have a minimum rating of 4.85 with at least 250 rides given.

On top of that, when you request an Uber Comfort ride, you can tell the driver in advance whether you want to chat or not, and what temperature you want the vehicle to be.

Uber started offering these preferences on Uber Black rides previously, and has imported them to the Comfort offering.

The big plus with Comfort is the newer model vehicles and guaranteed legroom, at a lower price point than Uber Black, and usually Uber Select.

How Does Uber Comfort Differ From Uber Select and Uber Black?

Uber Select offers higher end luxury vehicles (2010 or newer), but no rider preferences. Most Uber Select vehicles will have additional legroom, but can be significantly older than Uber Comfort cars.

Uber Black offers high end luxury vehicles no more than five years old, with a licensed commercial livery driver, and additional rider preferences. While you can let a driver know your temperature and conversation wishes with Uber Comfort, with Uber Black, you can also let your driver know if you have bags that you’ll need help with. Uber Black vehicles also must have leather and a black exterior.

It does seem that the addition of  Uber Comfort could eat in to the Uber Select market, or even replace it altogether at some point.

After all, why would you use choose Uber Select, a service with weaker vehicle and driver requirements, when Uber Comfort seems to be a cheaper and better option. Don’t be surprised if Uber phases out Uber Select in favor of Comfort over the coming year.

Does My Vehicle Qualify For Uber Comfort?

If you drive for Uber in a city that offers Uber Comfort, have given more than 250 rides with a 4.85 or higher rating, and have a vehicle that is a 2014 model or newer, it may qualify.

Here is the current list of vehicles that qualify for Uber Comfort (2014 models or newer unless specified):

So, Uber Comfort costs the rider a bit more, but will Uber drivers see any of the extra fare?

Possibly, but probably not much more.

Where Is Uber Comfort Available?

Uber Comfort is currently available in the following markets:

Should you sign up to drive for Uber with an Uber Comfort Vehicle?

We do not recommend buying a vehicle just based on the fact that it qualifies for Uber Comfort. While you get a higher per minute wait time vs. Uber X, the per mile and per minute rates are almost identical, even though riders get charged around 30% more.

For more information on vehicle requirements for other Uber services such as X, XL, Uber Select and Uber Black, be sure to check out our Uber Vehicle Requirements page.

The Rideshare Vetting Process: How Uber and Lyft Screen Drivers