Two things happened in the past week that convinced me that Travis Kalanick cannot, or will not, solve Uber’s diversity and misogyny problems, and should step aside as CEO.

First, Uber released its diversity report. It shows an incredibly homogenized company that is likely an unfriendly environment if you are not white and male.

Uber released its diversity report as part of its response to former Uber engineer Susan Fowler’s blog post in February, which detailed the sexist and hostile work environment she experienced at Uber. The response included hiring former Attorney General Eric Holder to conduct an investigation (ongoing) into Ms. Fowler’s allegations.  Additionally, the only woman on Uber’s board, Arianna Huffington, gave a number of interviews, in which she appeared to defend Mr. Kalanick, and denied that sexual harassment was a “systemic problem” at Uber.

The report itself showed a company that is white, Asian, and male dominated. 85% of Uber’s tech employees are male.  Out of 138 senior executives, only 37 are woman, 2 are Hispanic, and 2 are African American. There used to be 1 African American executive at Uber, but then they hired Bernard Coleman III to be the Global Head of Diversity and Inclusion.  Congratulations Uber, you’ve doubled the number of black high-level executives at the company.  Overall, in the tech department, almost 90% of Uber’s leadership is male.

Outside of leadership positions, the numbers aren’t any better. 85% of tech positions are filled by males. Hispanics, African Americans, and those who self-describe as multiracial make up under 6% of Uber’s tech workforce. In fact, the only areas in the company where those groups seem to be well represented are in customer support, administrative, and operations positions. One important thing missing from the report is the company’s employee retention rate. The fact that the company failed to include this information likely indicates that Uber’s retention rate, especially among women and people of color, is not very good.

Besides the hard numbers, the report also demonstrated astonishing tone-deafness by highlighting staff groups for different minorities that have cringe-worthy, or downright offensive names. If you’re black at Uber, you can join UberHUE, and if you’re Hispanic or Latino, you can be a part of Los Ubers. Oh, and at Uber, you’re not a Jew, you’re a Jewber. 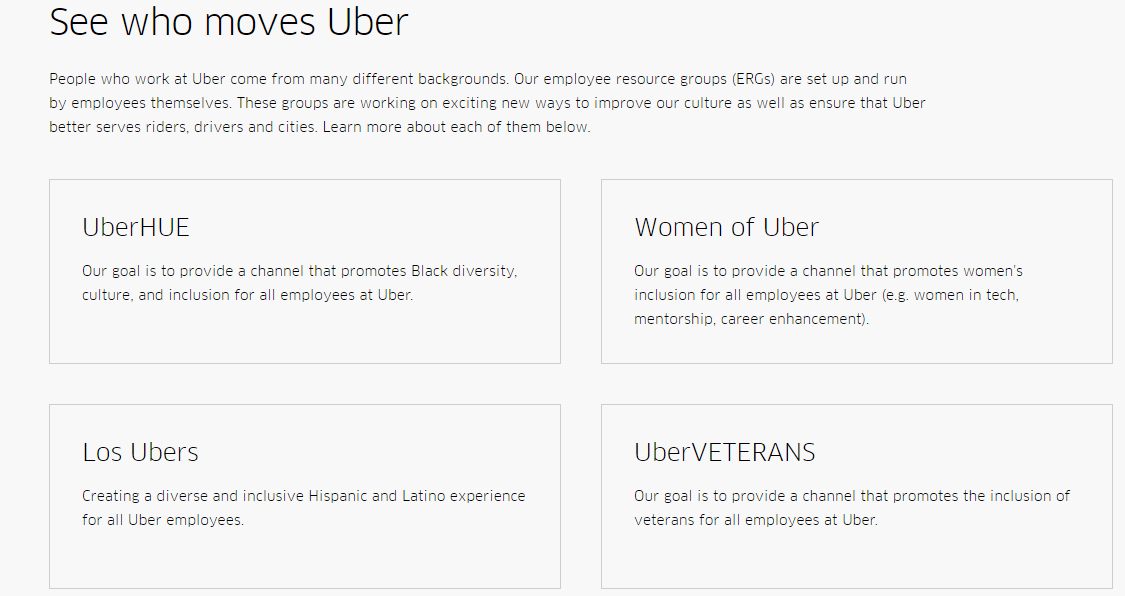 Second, The Information published a report about a trip by Uber executives to an escort bar in South Korea, and the subsequent efforts by Uber to keep reporters from finding out about the trip. The report demonstrated that Uber, rather than trying to fix its problems, is actively trying to cover them up.

Aside from the diversity report, over the weekend, Gabi Holzwarth, the ex-girlfriend of CEO Travis Kalanick, revealed that she accompanied Mr. Kalanick and other senior Uber executives to an escort bar in South Korea. Ms. Holzwarth did not intend to speak out. However, a few weeks ago, Emil Michael, Uber’s SVP of Business, called Ms. Holzwarth and told her to lie to any reporters asking about the incident (Mr. Michael denies Ms. Holzwarth’s characterization of the call). According to Ms. Holzwarth, Mr. Michael (who went to the escort bar) told her to say they just went to a Karaoke bar. Instead, Ms. Holzwarth spoke to a reporter at The Information.

The diversity report shows that Uber has serious problems. Unfortunately, Mr. Michael’s behavior shows that Uber intends to not only do nothing about those problems, but is still trying to actively sweep those problems under the rug. Given Mr. Michael’s history, this is not surprising. After all, in 2014, Mr. Michael suggested (in front of a reporter) that Uber hire a team of people with a million dollar budget to conduct a smear campaign against reporters who wrote negatively about Uber. Earlier today, I saw a report that said Mr. Kalanick might finally fire Mr. Michael. While he should, that in itself is not enough. Mr. Kalanick himself should step down because he is also part of the problem.

Uber’s problem goes beyond the diversity and sexism issues that are present at every large company today, even those companies that make strenuous efforts to do the right thing. Its main problem stems from what many refer to as its “baller” culture, which Mr. Kalanick instilled and nurtured at the company. The original meaning of the term referred to a really good basketball player. While the term predates the song, Skee-Lo used the term this way in I Wish, in 1995. To Mr. Kalanick though, being a baller means that you are, or perceive yourself to be, a bad ass, or a big shot. He actually said, in an oblivious act of cultural appropriation, that he started Uber so he could be a baller.

It was a lifestyle thing. Me, my cofounder, and our hundred friends could roll around San Francisco like ballers. – Travis Kalanick

The problem is that many ballers may think of themselves as ballers, but other people don’t always see them that way. They just see them as jerks. Now, if Mr. Kalanick was just rolling around San Francisco acting like a baller, it would be one thing. However, he’s running a company with 15,000 employees. This is a problem because ballers tends to make poor executives and terrible CEO’s. Many ballers walk around thinking every woman wants to sleep with them, because they’re a baller. Often, they hit on and harass woman incessantly. This is obnoxious and annoying, but at a workplace, it’s not acceptable and is also illegal.

Former Attorney General Holder’s report won’t be out for a while, but I can almost guarantee it will show a work culture at Uber that is hostile and unfriendly to women and people of color. It will likely detail a number of examples of racist or sexist behavior that occurred at the company and will recommend changes. Unfortunately, the real change needed is for Travis Kalanick to step down and hire a professional CEO. Otherwise, Uber’s baller culture will continue and various groups will continue to be harassed and marginalized at Uber.

Previous Post: Uber’s Diversity Report – Uber has a lot of work to do, part 2.

Next Post: How does Uber and Lyft driver insurance work?