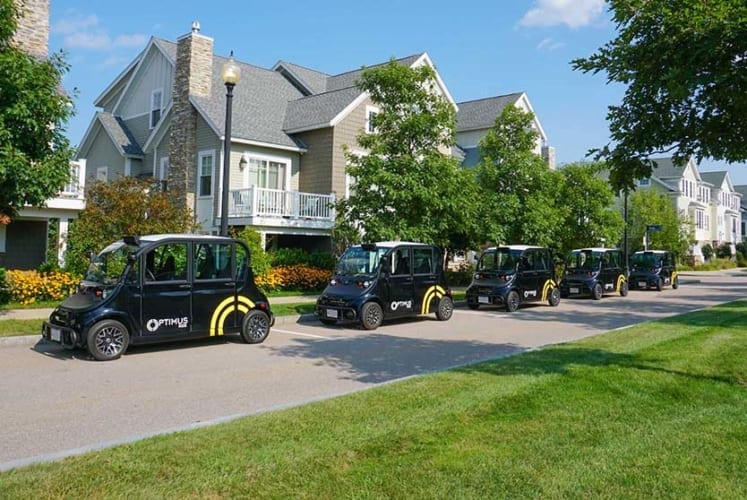 This past week, Optimus Ride starts their self-driving shuttle service in Brooklyn’s Navy Yard, Postmates gets the OK to start testing robo-deliveries in San Francisco, and Uber Health scores a huge win for their new medical transportation service.

San Francisco Public Works confirmed Postmates will be testing their new Serve robots in the city. The permit hasn’t yet been issued, and it’s unclear when deliveries will begin.

This is the second robo-delivery test for Postmates. Back in 2017, the company partnered with robot manufacturer Starship Technologies to test robo-deliveries in Washington, DC. DoorDash also tested Starship Tech robots in Redwood City, CA.

Postmates Serve robots can carry up to 50 pounds over short distances and include a touchscreen for customer interaction. Customers order via the Postmates app as normal and are provided with an unlock code to get their deliveries.

Will robo-deliveries replace the need for human drivers? Not hardly. Postmates sees its Serve fleet as a way to lower the cost of short-range deliveries. Because the robots travel at low speed on city sidewalks using lidar sensors, there’s no way they could replace Postmates drivers. At least not yet.

Optimus Ride partnered up with The Brooklyn Navy Yard Development Corporation to provide six AVs to provide transportation from the ferry to workers in the area.

With over 10,000 workers, Brooklyn’s Navy Yard is known for being highly congested and not easily accessible from the ferry. This new service will change that.

Is it possible that the AV shuttle will replace the other two shuttle lines that run to the subway? It’s unclear at this time. Until Optimus Ride gets the kinks worked out, probably not.

Bykea is similar to Didi Chuxing, and services run the gamut from mobile payments to ride-hailing to food delivery.

The investment was part of Bykea’s $5.7 million Series A round of investments. It is the largest investment round for any Pakistan-based startup ever.

Pakistan is ripe for a service like this. Bykea claims to have a network of 200,000 drivers and over two million app users so far. In a country of 200 million people where getting around is difficult due to traffic and lack of access to vehicles, Bykea fills a huge need.

But there’s plenty of competition for Bykea. Other companies include Pathao, Parsel, and ShadowFax. However, these companies are all based in other countries. Bykea differentiates itself by being the only app with an interface in Urdu, the country’s official language.

Bykea has a long road ahead. By continuing to raise investor capital and differentiating themselves from the competition, they are sure to become Pakistan’s biggest logistics vendor yet.

In order to keep up with rising costs and competition from ridesharing companies like Uber, rental app company Car2Go is increasing their rates.

The company rents cars by the minute and is changing rates to reflect how busy the service is. Car2Go’s new pricing structure is similar to Uber and Lyft. Advertised prices will show floor rates, which are the lowest possible per minute rates for a rental. Actual prices will vary.

We think these price hikes are a bad idea. All this will do is confuse current customers. With a pricing structure similar to Uber and Lyft, customers are more likely to catch a ride rather than deal with the hassle of renting a car they have to drive themselves.

Non-Emergency Medical Transport (NEMT) is a fast-growing industry, as insurance companies see immense value in helping their clients get to and from doctor’s appointments. This cuts down on the number of emergency room visits and saves insurers money.

Is Uber Health the answer to the company’s big losses? Maybe. However, regulatory hurdles make it expensive to ensure HIPAA compliance.