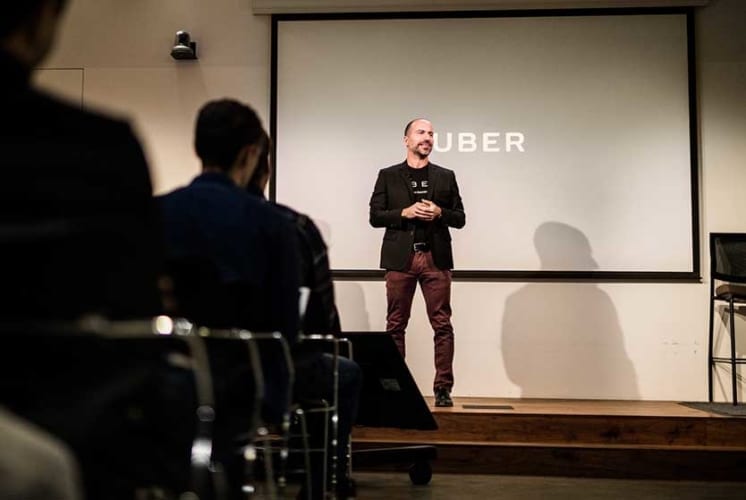 This week, Uber keeps IPO details confidential as it talks up investors, Phantom Auto attempts to expand into logistics with its latest funding round, and proposed rideshare tax debates heat up in Georgia.

Uber Woos Investors With Road Show for May IPO

After months of anticipation, the company that started the ridesharing industry began touring the country to talk up investors. Uber privately filed with the SEC for its IPO back in December, and little information is available about what the offering price will be.

This is the second ridesharing company to go public this year, and one of a handful of tech unicorns that are focusing on growth above profits. Uber CEO Dara Khosrowshahi stands to pocket a $100 million bonus if Uber’s valuation stays at $120 billion or higher for 90 days past the IPO.

Experts speculate that the Uber IPO could make Lyft stock more attractive since Lyft is a smaller company that had higher growth, and smaller losses. But growth doesn’t always translate to profits, and after the first day of trading, Lyft stock dropped significantly.

Uber lost over a billion dollars last year. While the platform is growing and the company is constantly seeking new markets and creating new services, growth for growth’s sake isn’t a sustainable long-term business solution.

While autonomous vehicles are making headlines with new AI that can drop a car virtually anywhere, Phantom Auto has been quietly working on remote control tech. The company recently raised $13.5 million in its latest financing round, for a total of $19 million since opening in 2017.

Phantom creates software that allows humans to remotely pilot vehicles in difficult traffic situations, bad weather, and other hazardous conditions. Using only a cellular connection, the company is now expanding into the logistics sector, driving everything from forklifts to semi trucks.

Though autonomous vehicles look promising, many companies have invested billions of dollars and still require human intervention on premises. Remote control technology flips this idea on its head, giving the software the ability to take over where humans often fail. It will be interesting to see what this does in the upcoming months.

A proposal to amend HB 276 in Georgia legislature could tax riders up to 8.9% every time they use Lyft or Uber to catch a ride.

The potential law changes come after Georgia failed to collect sales tax from Uber back in December 2018. The Georgia Department of Revenue sent a $22 million tax bill to Uber for three years of uncollected sales taxes. Uber disputed the bill, stating there is no state tax on rideshare rides.

As ridesharing has become the norm around the United States, many government agencies are responding by creating or changing legislation in order to get a cut of the profits. Unfortunately, these taxes hurt drivers, riders, and the local economy.

While the final details of the bill haven’t been approved and Uber is still debating its tax liability, it may be safe to assume that rideshare taxes will become standard for most passengers in the US

From Bikes to Scooters: Are Mobility Companies Finding Their Sweet Spot?

The dockless bike trend seems to be fading as it did in China. When the sudden surge in popularity began back in 2017, US and Chinese companies began popping up all over. Critics warned that the shine of dockless biking would wear off. When China pulled out of the US market last year, it essentially sealed the fate of profitable dockless biking services.

Though governments seem to be fully on-board with the program like Divvy in Chicago, are these programs destined to disappear? If so, it would be a blow to Lyft, who purchased Motivate, the largest U.S. bikeshare provider, last year.

While the answer seems to be yes, what works in the for-profit industry sometimes lingers past its prime in the nonprofit sectors. Mobility companies, including Lyft, have found a new, possibly profitable, venture in electric scooters.

The data seems to back this up, as The National Association of City Transportation Officials reported that scooter trips were higher than station-based bike share in the United States for the first time in 2018. Now, companies like Lime, Jump, and Lyft Scooters just need to work on scooter durability.

Market research is the latest innovation in the on demand economy. Native, with operations led by former Uber staff, uses its platform to get market research in the trenches from locals. This research is vital to brands that rely on emerging markets and need up-to-the-minute pricing information in order to stay competitive. A recent $2.5 million funding round to manage its growth shows that its business model is working.

While Native is currently an outlier, this could be the start of the on demand economy becoming a mainstay of the B2B market.

Next Post: Insuring Your Airbnb, HomeAway, Or Other Peer-to-Peer Rental

Side Hustle Taxes: Learn The Ropes, Avoid Penalties, Save Money

Want a Side Hustle and a Full-Time Job? Key Things to Think About First