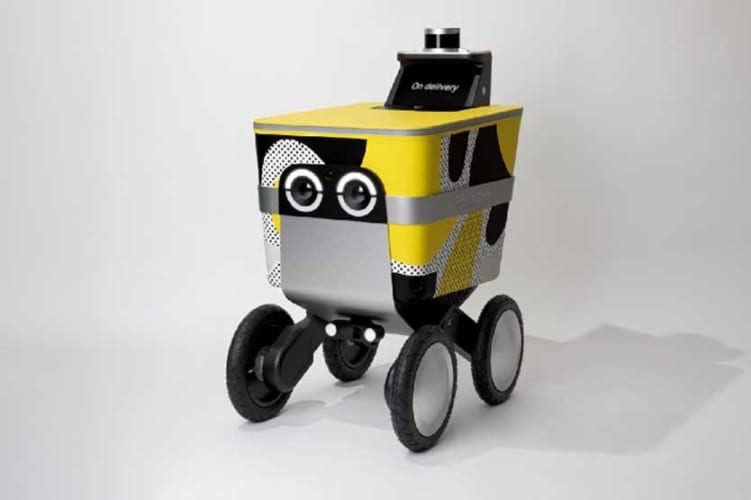 This past week, Postmates announces an upgrade to their delivery bots, Lyft Level 5 releases valuable data to the public and announces a research competition, and virtual car sharing helps pedestrians and autonomous cars interact.

After sustaining losses of $1.01B from Q1 2019, Uber announced it is cutting its global marketing team by 400 workers.

Uber’s marketing team was comprised of 1,200 workers worldwide, and this latest round of layoffs reduces staff by one-third and represents the largest restructuring of the company to date.

According to CEO Dara Khosrowshahi, “Many of our teams are too big, which creates overlapping work, makes for unclear decision owners, and can lead to mediocre results.”

As Uber struggles to appease investors, it’s likely the company will continue to experience layoffs. Two top executives, including the company’s Chief Marketing Officer, left in June, when Khosrowshahi decided to consolidate the marketing, communications, and policy teams into one department.

These recent layoffs combined with Uber’s campaigns to keep drivers classified as contractors will continue to hinder the company’s ability to turn a profit.

The Race for Robo-Deliveries Heats Up

Postmates’ delivery robot, Serve, just got an upgrade. The company announced it will be adding OS1 lidar sensors from Ouster to help Serve better interact with pedestrians and objects on LA sidewalks.

Postmates isn’t the only one investing in delivery robots. Amazon recently began testing a prototype of its delivery robot, Scout, using simulated environments to train it faster than having it out in the real world. FedEx is also testing its SameDayBot with various retailers.

By moving away from human deliveries, companies using robots don’t have to worry about the current pressure to classify contracted drivers as employees.

Who will be the first to get their robots on the road? Only time will tell. While Amazon’s plans to speed up robot training may make them first to deliver, simulated environments are no match for on-the-street testing.

As Postmates continues its march toward an IPO, innovations like these may help them turn a profit faster than Uber and Lyft ever could.

Quantum Signal has been around since 1999, working on AI and advanced robotics applications for various industries including the military.

In an effort to speed up its foray into the autonomous vehicle industry, Ford announced it acquired Quantum Signal.

Though Quantum Signal’s work thus far has not been focused on self-driving cars, Ford states the company’s “extensive experience in real-time simulation and algorithm development” will help Ford develop AVs.

After the announcement of Ford’s acquisition to the Quantum Signal team, Quantum Signal CEO Mitchell Rohde stated, “All engineers want to do meaningful work that makes a difference, not sit on a shelf.”

The details of the deal are still unclear, but so far Ford has allowed the companies it has acquired over the past few years to operate independently. Experts think Quantum Signal will be no different.

It’s important to note that, as of now, no company has yet to create a fully-autonomous vehicle. Will Ford be the first to put a Level 5 AV on the road? By investing in small companies that include some of the brightest minds in tech, they are well on their way to solving the problem.

Lyft Opens Up Autonomous Driving Dataset to the Public

Lyft Level 5, the company’s R&D arm for self-driving vehicles, recently released a dataset “to level the playing field for all researchers interested in autonomous technology.”

According to Lyft’s EVP of Autonomous Technology Luc Vincent, the dataset includes 55,000+ human-labeled 3D annotated frames, data from 7 cameras and cars with up to 3 lidars, a drivable surface map, and a spatial semantic map that includes things like crosswalks and lane markings.

In addition to releasing the dataset, Lyft Level 5 is also sponsoring a research competition with a $25,000 in cash prizes and a chance for top researchers to interview with the company.

As companies like Lyft continue to struggle with pressures from lawmakers to classify drivers as employees, Level 5 autonomous vehicles may come to fruition a lot faster than expected.

Researchers at the Korean Advanced Institute of Science and Technology (KAIST) have come up with a unique way to solve one of the problems inherent with self-driving cars: a lack of driver-pedestrian interaction.

Here’s how it works:

This innovation gives humans the ability to interact with cars as in the past. While the car itself is not fully autonomous (a remote driver is needed to interact with others), the applications of this new idea will help bridge the gap between what’s currently available until researchers unlock the key to Level 5 autonomy.

Next Post: Lyft E-Bikes Are a Hot Topic in San Fran and DoorDash Buys Caviar

Rideshare Advertising – Is It Worth It For Lyft & Uber Drivers?