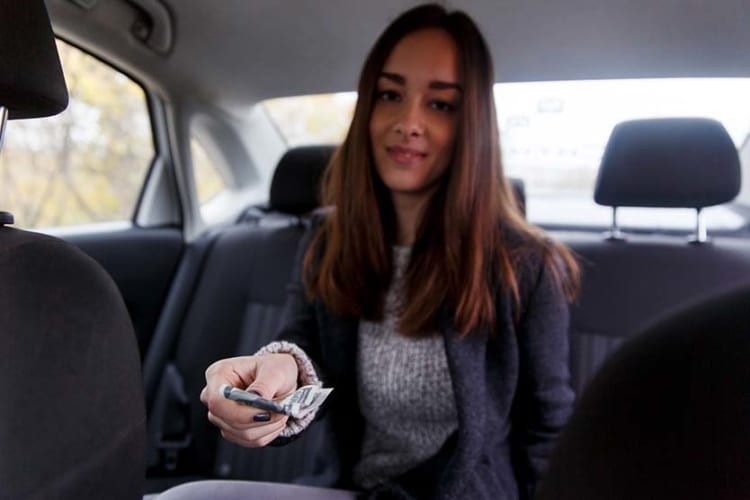 If you’ve been driving Uber or Lyft for a few weeks, someone has probably asked you to take cash for a ride, instead of paying through the Lyft or Uber app. It may have been an acquaintance. “Hey, can you drive me to the airport tomorrow for $20 cash?” Or a rider may have requested to pay cash on a long trip. Whoever makes this request of you, the answer should always be the same – NO.

I know there are many drivers out there who take cash rides. Some even do it daily. It’s become so prevalent, there’s even a name for it – Back Door Ubering. I understand. The allure of cash rides is strong, especially since the introduction of Upfront Pricing. Passengers like them because they save a few bucks. Drivers like them because they make a little more, and they have the cash in hand right after the ride. Also, there’s the added satisfaction of beating the system.

However, whether you’re a passenger or driver, you should never, ever, take a cash ride. The risks are simply too great. For a driver, the risks of taking cash, instead of completing the ride through Uber or Lyft, are substantial. For one thing, if you get caught, both Lyft and Uber will likely deactivate you. But that’s not even the largest risk.

The biggest risk is that cash rides have absolutely no insurance coverage. Zip, zero, ziltch, nada. No coverage whatsoever.

Both Uber & Lyft offer $1,000,000 liability insurance while on a trip, along with contingent collision and comprehensive coverage. So, if you’re on a trip, and you have an accident where someone is injured, the driver has insurance coverage. On Uber, your out of pocket expenses would be limited to $1,000. On Lyft, they would top out at $2,500. While that’s expensive, if you want to know what the likely cost would be if you didn’t have insurance, just add a zero or two to the Lyft number – $25,000 – $250,000. Depending on the extent of the injuries caused by the accident, the total liability could be even higher. Yup, without insurance, the cost of having an at fault accident while driving Lyft or Uber would drive most people into bankruptcy.

What Happens In The Event Of An Accident On A Cash Uber or Lyft Ride?

Well, if you take a cash ride, Uber or Lyft do not provide insurance for that ride. The driver would not be covered, and the passenger wouldn’t be covered either. If you’re a passenger, obviously you won’t be liable for damages caused in an accident. But, if you are injured in an accident on a cash ride, you also won’t be able to get any of your medical expenses covered, because the ride is uninsured.

If you’re a driver, there’s no easy way to put this. You’re totally screwed if you have an accident on a cash ride. Uber or Lyft won’t provide coverage, and neither will your insurance company. But I have rideshare insurance, you say? It doesn’t matter. Almost every rideshare policy in existence only provides coverage for rides given on a TNC network (Uber or Lyft). Many rideshare policies don’t even cover driving for Amazon Flex or Instacart!  The only way you can conceivably do cash rides that are covered by insurance is if you have a full commercial policy. Most drivers don’t have full commercial coverage because it runs in the neighborhood of $400 – $600 per month. Also, since rideshare coverage exists and is now available in most states, most drivers simply don’t need full commercial coverage.

But What If I Don’t Tell My Insurance Company I Was Doing A Cash Ride?

I’ve heard many stories of drivers having an accident and not telling their insurance company that they were doing rideshare. This was especially common before rideshare insurance was widely available, and the practice still persists today. You really don’t want to do this. For one thing, your insurance company may find out, in which case the won’t provide coverage. Also, lying to your insurer about the fact that you were doing a cash ride is called something else – insurance fraud. While the odds of prosecution are really low, I’m pretty sure it’s a felony.

You’re probably right. The likelihood of an accident on an individual cash ride is low. You’ll probably complete the ride and nothing out of the ordinary will happen

However, if you’re considering giving or taking a cash ride, consider whether the extra five or ten bucks is really worth risking every cent you have in the bank, or a felony conviction. If you think about it, it’s just not worth it.

So, if someone asks you to take cash for a ride, remember that D.A.R.E. assembly, and Just Say No!

If you drive in a market where Uber accepts cash (mostly certain markets outside the U.S.), this article doesn’t apply to you. Take all the cash rides you want.

Next Post: Eight Things to Tell Your Lyft Driver in Advance

What to do if your Lyft or Uber application is pending.

10 Ways To Improve Your Lyft Or Uber Fuel Economy

The Best Cities To Drive Uber And Lyft