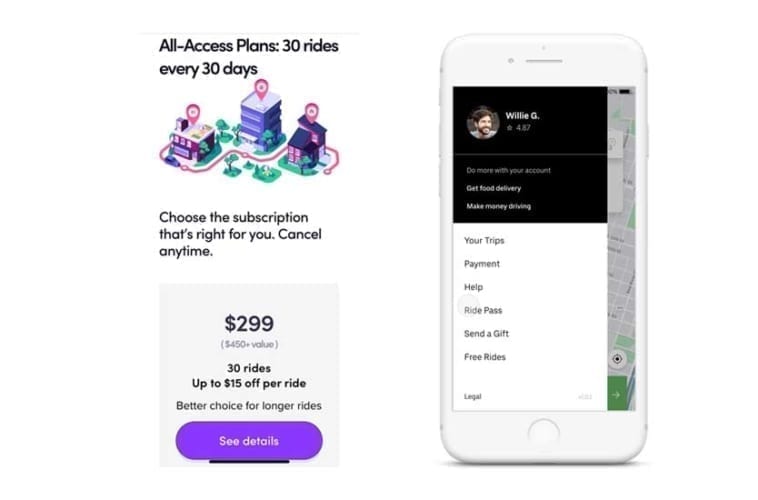 As Lyft and Uber race to their expected IPOs in 2019, they’re continuously launching new programs and services. Most recently, the two companies have turned their attention to subscription services. While each rideshare powerhouse is going about the process differently, they both have the same goal — reducing customer trip costs. Before deciding on your own subscription, you need to have all the facts. Here’s everything you need to about Lyft and Uber’s subscription services.

Lyft vs. Uber: The Road to Subscription Offerings

Uber was the first rideshare company to begin the move to subscription offerings. Back in 2016, reports began surfacing of their Uber Plus service. This service eventually appeared as Flat Fare Ride packages in 2017, and later evolved into the invite-only Uber Ride Pass in multiple variations. The most recent Ride Pass announcement came in October 2018, when the program launched to the public with a finalized arrangement.

While Uber led the drive toward subscription services, Lyft’s subscription evolution occurred much more quickly. The company began testing their All-Access Plan options back in late 2017, and finally launched the service to the public in October 2018. During the testing phase of this newest plan, they also launched a Personal Plan offering in July 2018 and an invite-only Commute Plan early in the year. Even though they weren’t the first in the game, they’ve quickly caught up and exceeded Uber’s subscription options.

What You Need to Know About Lyft’s Subscription Plans

Over the past year, Lyft has tried out various subscription options through trial programs. Currently, they offer three styles of subscription plans:

All three offerings are lumped under the Lyft Pass umbrella, but only two are currently available to the public. However, the recent launch of All-Access brings the future of the other two programs into question.

After months of testing and changes, Lyft’s All-Access Plan is now accessible to riders across the U.S. There are currently two Lyft all access subscription plans.

This is a fantastic option for regular Lyft users. Unlike the company’s other subscription plans, riders aren’t required to stick to set routes. As a result, you achieve both savings and flexibility. If any trip exceeds the $15 restriction, you simply pay the overage amount. After hitting the 30-ride limit, subscribers still receive a 5% reduction on all additional trips. 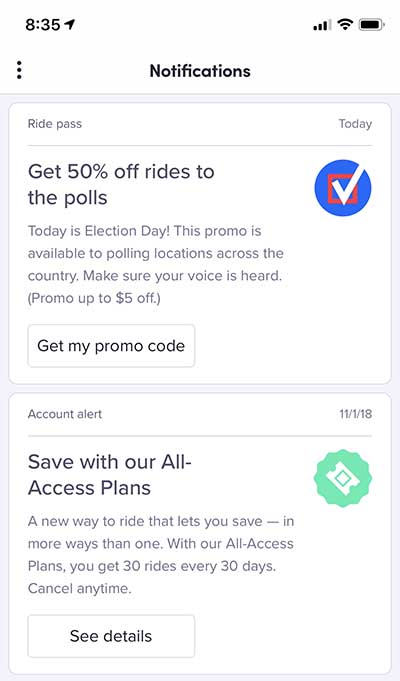 The Lyft Personal Plan offers a slightly different arrangement from the All-Access offering. With this plan, users pay a set monthly fee to lock in a specific route rate chosen by the rider. The only restriction is that the trip can’t exceed $25. This arrangement allows you to avoid surge pricing and keep your overall costs low.

The Personal Plan is an excellent choice for anyone who only takes a few trips per week. However, if you use Lyft more than 30 times per month or don’t utilize the same route regularly, then the All-Access plan may be a better choice. To figure out which one will save you the most monthly, consider your rideshare route habits and frequency.

The Lyft Commute Plan is only available by invitation, which is sent directly in the app. It’s designed to offer a locked-in reduced rate on a rider’s most-used route, typically from their home to work and vice versa. It’s also accompanied by a monthly access fee. However, Lyft users aren’t allowed to choose the route themselves. Instead, the app makes the selection based on the rider’s settings.

The Commute Plan is very similar to the Personal Plan, essentially serving as the latter program’s inspiration. It is currently unknown whether this product will fully launch to the public as a standalone option, or if current users will be forced to switch plans. The exclusivity of the plan also means there’s very little known about the pricing specifics.

What You Need to Know About Uber’s Subscription Plan

Uber has fewer subscription options, all of which exist as options within Uber Ride Pass. Originally, the Uber Plus service was tested and launched with a limited number of subscription offerings under the name “Uber Ride Pass.” However, the service was invite-only through every previous pilot version. There were also a limited number of passes available.

Now, the company has nailed down the details for their public launch. Instead of limiting the service through 28-day pass purchases, customers pay a rolling monthly subscription fee. Here’s a closer look at the most recent version of Ride Pass:

Uber Ride Pass is designed to help reduce travel costs for regular riders. A monthly subscription fee provides unlimited, around-the-clock access to locked-in rates throughout a designated service area. All of the rates are figured by the company ahead of time, so you don’t have to deal with jumps in prices as a result of demand or timing.

Currently, the service is only available in five cities — Austin, Denver, Los Angeles, Miami and Orlando. Residents in Los Angeles face a higher monthly charge at $24.99, but they’ll also be the first to gain access to special perks for e-bikes and scooters. Additionally, all riders receive a 15% rate reduction on routes not included in their flat-rate service area.

If you don’t see an Uber ride pass option in your app menu, then they are not available in your area, or all the Uber ride passes for your market have sold out for the time being.

The Power of Lyft and Uber Subscription Plans

The move toward subscription services in the rideshare industry is a natural one. Spearheaded by Netflix in the late ’90s, the concept has entered just about every industry within the last decade.

From entertainment and beauty supplies, to groceries and household necessities, today’s consumers love subscription services. Companies love them because they’re a reliable and predictable revenue stream. As such, it was only a matter of time before the service model made its way into the rideshare and delivery arena.

Since so many individuals utilize both Lyft and Uber, the subscription services also serve as a way to score customer loyalty. By locking customers into one plan on one rideshare platform, they are given an incentive to stick with it and get their money’s worth. Naturally, both companies’ plan offerings will continue to evolve in the next few years in an effort to out-do one another.

You can get your Lyft All Access Plan or Uber Ride Pass by signing up below. You’ll also get a free or discounted Lyft or Uber ride when you sign up!

Ride With Lyft
Ride With Uber

Uber is delaying the release of its investigation into gender bias, report says