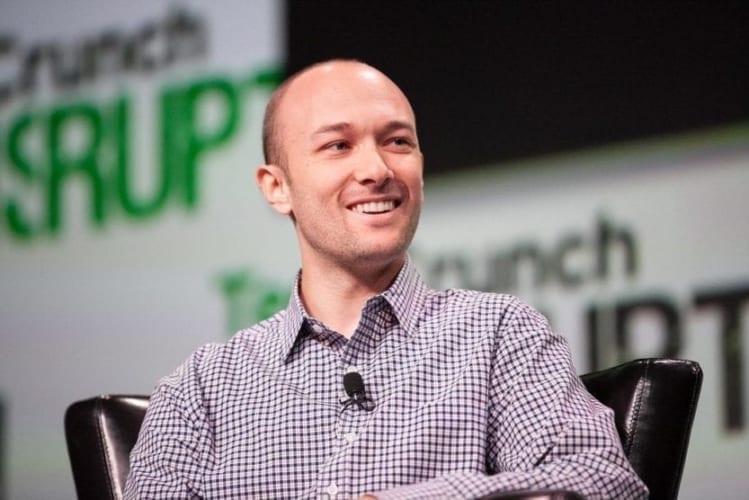 Lyft ended 2016 stalled. Although the company narrowed its losses in 2016, it’s market share was stagnant at under 20%.

What a difference a year can make!

In 2017, Lyft successfully expanded to over a hundred new markets, more than doubled its ridership, and secured a huge investment and strategic partnership with Google.

Lyft CEO Logan Greene Has Plenty To Smile About 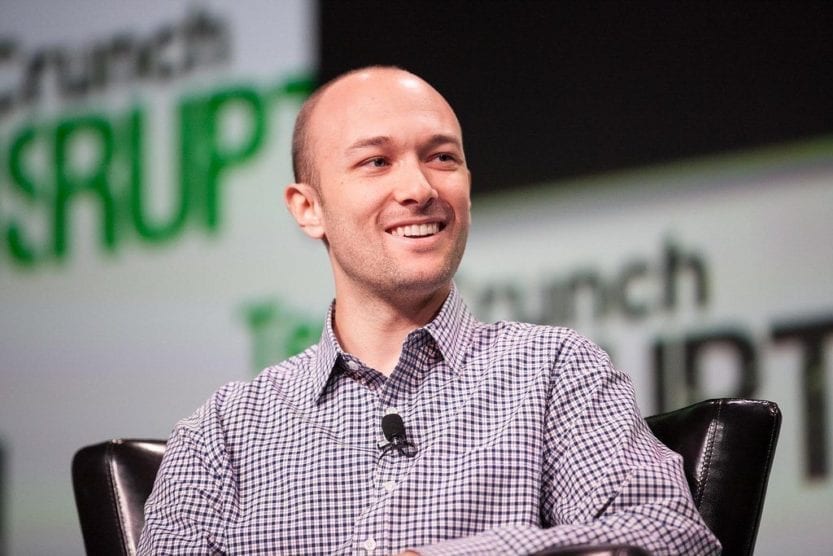 On the other hand, Uber’s 2017 probably could not have gone worse.

Although Uber lost $3 Billion dollars in 2016, they still had over 80% of the U.S. rideshare market and a market value of $70 Billion.

Uber’s current market value is debatable, but it’s definitely lower than $70 Billion. Even worse, Uber’s market share has been shrinking all year.

Here’s a quick rundown how 2017 went for both companies. 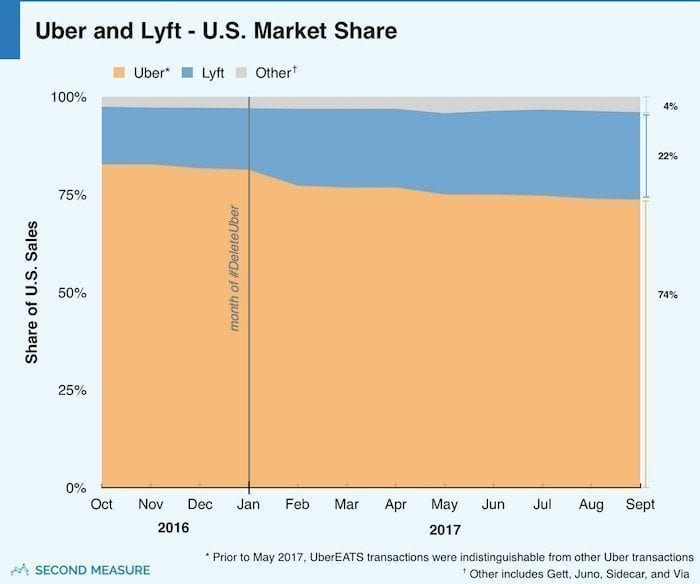 Lyft is currently giving over 1 million rides per day, more than double its 2016 per day average.

Overall, 2017 was a massive success for Lyft.

In some of the larger markets, they now have 40% of the market. However, in a number of smaller and midsize markets, Lyft is still hovering around 20% market share.

Given that Lyft loses substantially less money than Uber, and has much lower overhead costs, it ends 2017 well positioned to make further gains in 2018.

2017 was the year Uber’s repeated bad behavior and abhorrent corporate culture bit the company in the ass. Here’s a quick rundown of Uber’s no good, very bad year.

Taxi drivers at JFK airport went on strike to protest Trump’s Muslim ban. Uber decided to halt surge pricing at the airport during the strike, a move many viewed as support for the ban.

In response, people began deleting Uber from their phone and posting about it using the hashtag #deleteuber. It’s estimated more than 200,000 people deleted the app.

Former Uber Engineer Susan Fowler published a damning essay detailing the rampant sexism and sexual harassment that was commonplace at the company.

Uber President Jeff Jones, along with top execs Brian McClendon and Ed Baker, resign. At this point, Uber has no President and no COO.

Uber publishes its first diversity report. The numbers show a company that is anything but diverse. In fairness, the numbers aren’t any better or worse than the average tech company.

That former Google engineer, Levandowski, pleads the fifth in the Alphabet lawsuit. He then steps away from his role as head of Uber’s autonomous vehicle program.

Uber is unsuccessful in its bid to send the Alphabet lawsuit to arbitration. I guess if you’re a multi-billion dollar company, you can get out of arbitration with Uber.

At the end of the month, Uber fires Levandowski.

Uber fires 20 employees as part of Perkins Cole’s ongoing investigation into sexual harassment at the company.

CEO Travis Kalanick takes a leave of absence from the Uber.

David Bonderman, an Uber board member and all around idiot, resigns. Believe it or not, at a board meeting to discuss rampant sexism at the company, this schmuck made a sexist joke. Smdh.

The FTC launches an investigation of Uber’s privacy practices.

On June 20, Uber launches 180 days of change, a program to improve its standing with drivers. 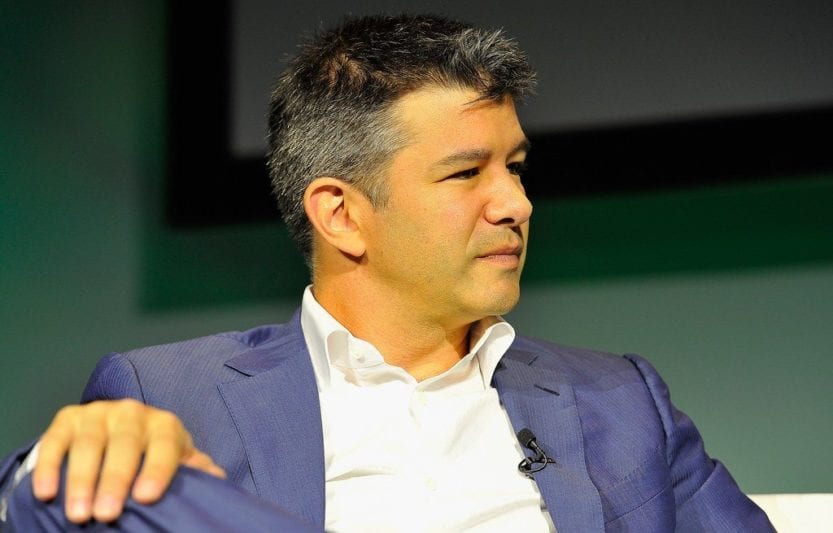 Benchmark Capital, a major Uber investor, sues Travis Kalanick in a bid to have him removed from the board.

As it turns out, Uber knowingly leased recalled vehicles to drivers in Singaport.

Uber hires a new CEO, Dara Khosrowshahi, who was the CEO at Expedia.

Uber announces that they will no longer track riders after their ride ends.

The Justice Department announces a preliminary probe into allegations that Uber may have violated the Foreign Corrupt Practices Act, by bribing people in some of their foreign markets.

The Regulator Transport for London (TfL) strips Uber of its operating license.

Statement from the Regulator Transport for London
“Uber’s approach and conduct demonstrate a lack of corporate responsibility in relation to a number of issues which have potential public safety and security implications,”

Uber pulls out of Quebec after the province passes tougher rideshare regulations.

Alphabet says it wants $2.6 Billion from Uber for stealing its stuff.

Reports surface of a pending deal in which Softbank will invest up to $10 Billion in Uber. The deal would value Uber at $50 Billion, or $20 Billion less than Uber was worth at the start of the year.

Uber appeals the London decision that stripped it of its operating license.

Softbank finalizes a deal to buy at least 14% of Uber.

Uber loses its appeal of a case in the UK that ruled it’s drivers were workers, not independent contractors. As such, they are entitled to overtime and benefits like vacation pay.

Uber & Lyft are both looking to IPO  in the next couple of years. Here’s what both companies should do next year to prepare for their IPO.

Uber needs to stop hemorrhaging money. They lost $3 Billion last year, and will probably lose around $2.5 Billion this year.

To get closer to profitability and go public, Uber is probably going to have to lay off some employees in some markets. Unlike Lyft, Uber overhired as it was building up its operations. In 2016, they doubled their number of employees. As a result, they have a massive employee headcount.

They also have massive overhead because they opened offices in too many cities. To rectify this, Uber needs to close some offices and centralize operations regionally.

Besides cutting costs, Uber needs to continue to repair its brand, and its relationship with drivers. While the new CEO is off to a good start, he’s got his work cut out for him.

Lyft’s main goal for next year should include strengthening its operations in suburbs, and mid-size markets. Uber is still dominant in both of those areas. Lyft drivers main complaint in too many markets is that it’s just not as busy as Uber.

Moreover, many of the improvements Lyft made to the app in 2017 were simply reactions to improvements Uber made. To win 2018, Lyft must make proactive and independent improvements to the app. In other words, stop following what Uber does.

Finally, both companies should also raise driver pay, but that’s not likely to happen.

What changes do you think Lyft and Uber should make in 2018? Let us know in the comments.

Previous Post: How Much Do Uber & Lyft Drivers Make?

Next Post: The Best Phone Mounts For Uber & Lyft Drivers