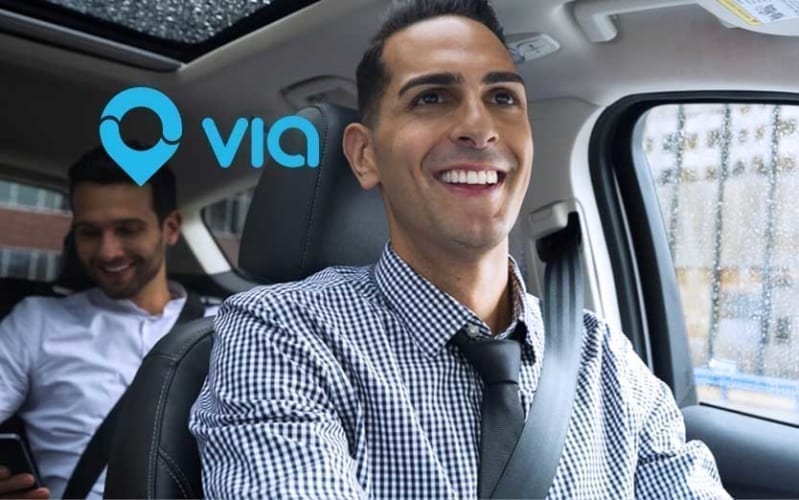 (Disclosure – We independently research our content to provide free advice for you. We may get compensation if you sign up with services, or purchase products through our affiliate links. We are not affiliated with or sponsored by Via Transportation.)

The rideshare industry has exploded in recent years. Lyft and Uber only seem to increase in popularity among commuters, but now there’s a new player in town—Via. The Via rideshare service is unlike any other option on the market, and as result, it’s quickly becoming a major competitor in certain markets like Chicago, London, New York and Washington, D.C. If you’re interested in becoming a Via driver, take a closer look at what the company is bringing to the table.

Currently, Via is offering up to a $2500 (Chicago, other cites have different amounts) sign up earnings guarantee. In addition, you may also receive a $30 bonus after giving your first ride!

How to Become a Via Driver

You can sign up using our referral link by clicking the button below.

What Is Via Rideshare?

Via is an on-demand rideshare service that mimics the arrangement of public transportation but without the hassle. Via provides flat rate rides to passengers along efficient preset routes, like a shuttle service.

The service is similar to other carpooling rideshare options, like Lyft Line and UberPOOL. However, instead of picking up riders that are nearby, Via’s system sets strategic pick-up locations on designated routes. It’s similar to Uber Express Pool, but with higher pay.

Unlike the other services, Via actually pays drivers more when they are matched with multiple riders along the same route.

Riders are matched to a preset trip in their current vicinity, and then they walk a short distance (usually about a block or so) to a chosen pick-up spot that’s convenient for the driver.

What Sets Via Apart From Lyft And Uber?

Via serves a niche section of the market, so it’s slightly different than other rideshare options. There are three main qualities that set Via apart from companies like Lyft and Uber:

Via only takes a 10% commission on rides, far lower than Uber or Lyft (cities also take a cut, so the overall commission is 15-20%).

Via’s rideshare service is designed around efficiency in high density areas. Trips follow specific routes on a consistent basis, resulting in less downtime, and fewer miles on your car.

Via’s drivers have the benefit of live support through text and by phone. While Lyft has decent driver support, some drivers find Uber support to be lacking.

While they’re fairly simple in nature, such unique attributes are why Via is quickly becoming a true competitor in the rideshare industry.

Where is Via Available?

Currently, Via is available in the following cities:

Via also operates ViaVan, a new rideshare service they launched in London in April, 2018.

Via’s rideshare arrangement is best suited for large metropolitan areas, so you can expect them to add more markets, like Seattle and Los Angeles, in the future. However, the niche focus may not allow it to enter smaller cities.

Via Vehicle And Driver Requirements

Via’s driver requirements are similar to Uber and Lyft. All applicants must pass a criminal and driving history background check before they’re approved to drive for the company. While you can’t drive with Via in New York City until you obtain a special TLC license, the company offers a variety of resources to help you through the process with ease.

The real difference between Via and their industry counterparts is the vehicles they accept. The company has stricter vehicle requirements in place, as they hope to provide a more high-end riding experience. Non-luxury vehicles can’t be older than 2010 models, while luxury models dating back to 2005 and newer are welcomed. They prefer cars and SUVs that are black, dark grey, or dark blue with leather interiors, but they’ll accept options with fabric seating as long as they’re newer models—2014 is the cut-off.

If your vehicle is not on Via recommended list, Via encourages you to apply anyway. They may allow your vehicle even if it’s not on the list.

All Via drivers must have their vehicle inspected. The rideshare company offers reduced service prices at their partner centers, but the costs are out-of-pocket for applicants. Via Chicago drivers must also schedule a new inspection yearly to stay in the fleet.

If you don’t have a vehicle or your current model doesn’t meet the minimum criteria, you can rent or lease one. The company has partnered with a few leasing companies to allow their drivers to begin earning quickly. However, the service is currently only available in NYC. 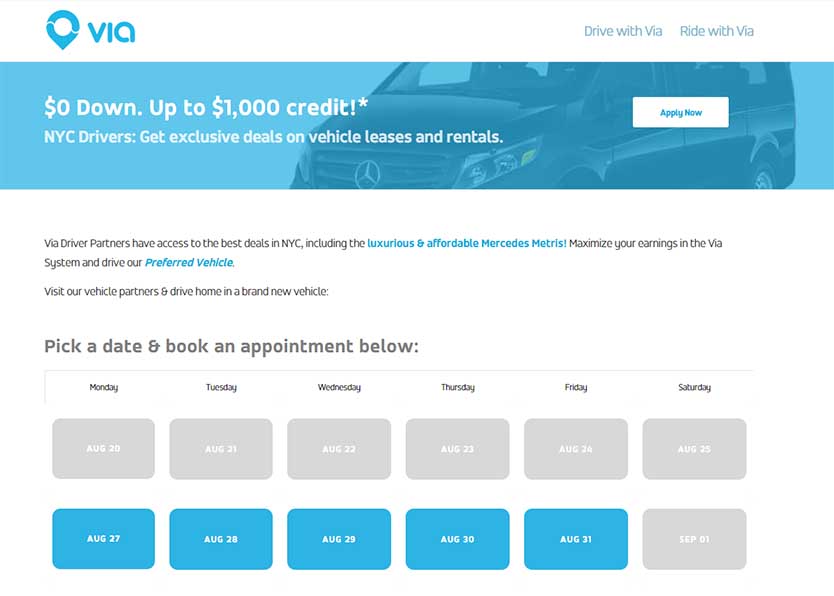 Overall, expect to earn in the $15-$20 per hour range, with earnings above $20 per hour during peak times. Earnings for NYC, and SUV drivers, can be higher.

Full time drivers can definitely earn over $1000 a week driving for Via.

ViaBlue is set up with an hourly earnings guarantee, so drivers are paid a guaranteed minimum per hour regardless of the number of passengers and trips they take. Based on demand, Via limits the number of drivers who can be online at once with ViaBlue.

ViaFlex does not have an hourly earnings guarantee. Other than that, it’s the same as ViaBlue.

Once the threshold for ViaBlue drivers is hit, drivers can still go online, but only in Flex mode. You still end up making the same fares per journey and incentives still apply, but you are not guaranteed to earn a certain amount per hour like you are on ViaBlue.

Via has put together a couple of short videos (there’s no sound on these two) explaining both modes.

Via’s driver fares are calculated based on a few different factors. These components include:

While the rider pays a flat fee, the driver’s earnings vary per trip. Each city has its own base rates. For example, Via NYC drivers are provided with a base fare of $2.55 plus $.35 per minute and $1.75 per mile.

There’s also the variable of hourly rates. If you’re operating in Blue mode and you don’t end up reaching the guaranteed amount, the company will automatically increase your payout to match. Via sets the amounts ahead of time, so you know the minimum earnings you stand to make. The rates also fluctuate throughout the day based on statistical demand, which results in higher hourly rates during peak hours.

During certain peak hours, the company offers rate hikes to encourage drivers to hit-the-road during those periods. Via will send out an alert the night before to allow drivers to plan accordingly. During Boosts, the hourly rate for drivers in Blue mode further increases, but unfortunately, Flex mode drivers don’t benefit from the perk. 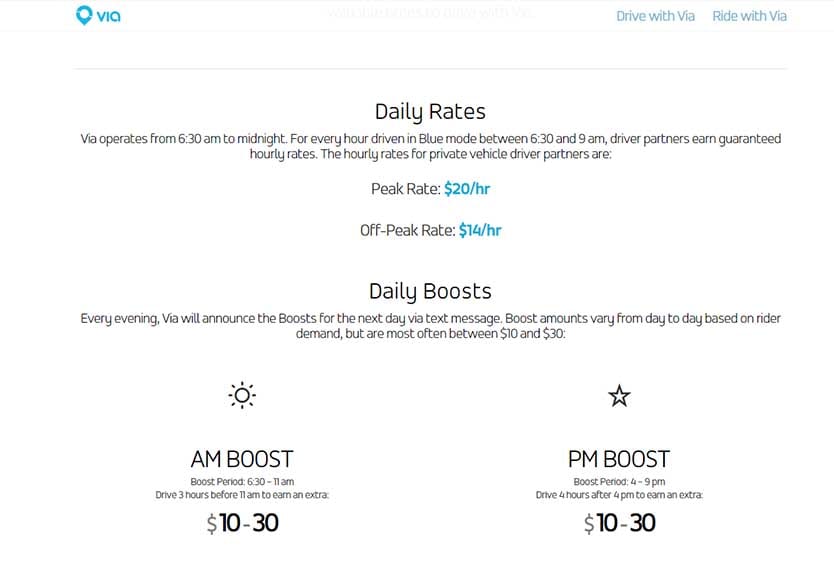 The bonus guarantee program provides a safeguard for those just entering the fleet. As long as you complete the required number of trips during a preset period (usually 100 rides in 30 days), they’re guaranteed to make $1,000.

To get your Via driver sign up bonus, start your Via application by clicking the button below (disclosure – referral link).

As with Uber and Lyft, Via offers surge pricing, which is known as Rocket Pay. When there’s an unexpected increase in demand, the company implements increased rates for a certain period of time. Drivers that accept rides when Rocket Pay is in place receive an automatic increase in fare rates.

Sharing Premium – The Via Multiplier System

One great thing about Via is their multiplier system. Other companies’ variations of carpooling actually offer their drivers lower fares than its single-trip counterparts. Via’s rideshare arrangement does the complete opposite – drivers earn more for each passenger they pick up. The Sharing Premium is designed to multiply the trip fare when additional passengers are matched to the driver’s route. The increase is broken down like this:

As with all rideshare companies, Via takes a commission from its drivers’ earnings. While Lyft and Uber pull out 25 percent to 40 percent of each fare, Via only takes 10 percent. Therefore, drivers end up taking home way more than their industry counterparts.

Along with the 10 percent commission, the cities Via operates in also take a cut. Chicago takes out a fee of 5 percent, while NYC and Washington D.C. take an additional 10 percent. While it does cut into your overall profits, the total commision and fee charges are still less than Uber and Lyft.

How to Become a Via Rideshare Driver

If Via sounds like the perfect company for you, it’s time to apply. The application process is fairly straightforward and similar to signing up for Uber or Lyft. Here’s how to do it.

First, you need to create an account. One the main sign up page, you’ll fill in basic information, including your name, email, phone, and driving city. 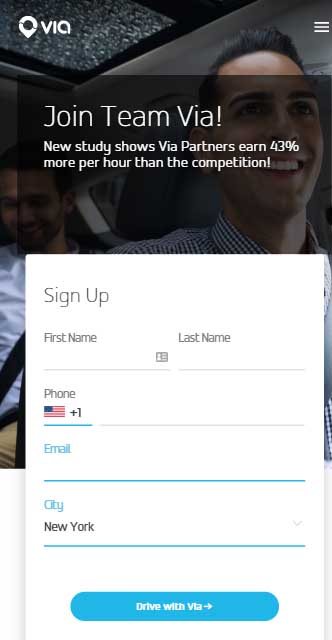 Then, you need to provide information regarding your vehicle. If you need to rent or lease one, you can choose that option instead. 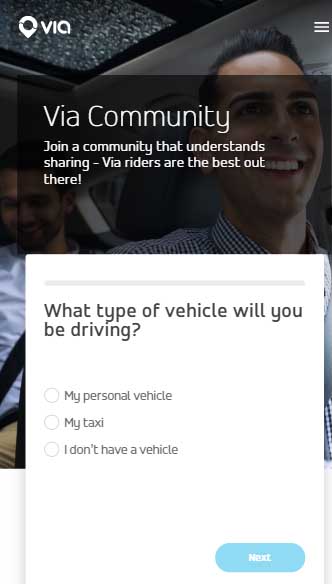 Next, you’ll provide your address and bank account information, so you can get paid. You’ll also need to submit your social security number so that the rideshare company can run a background check.

As you can see, the process is similar to the Uber and Lyft applications, so it shouldn’t require a lot of time. If approved, you’ll also need to arrange an inspection for your vehicle. After you’re given the all-clear, you can hit the road, but you’ll need to download the driver app first—it’s available on the iTunes Store and Google Play.

If you live in Chicago, New York City, Washington D.C., West Sacramento, or Arlington, TX, then you can click the button below (disclosure – referral link) to start your Via application and get your sign up bonus guarantee.

If you’re not in one of those cities, don’t worry. Via’s success thus far has already turned heads, so they should begin expanding to even more markets in the near future.

Driving For Via: A Video Walkthrough

Here’s a great video explainer Via that walks through what driving for Via is like. The video uses a tablet for an example, but driving for Via works the same if you’re using a phone. Also, be aware – this is a detailed video, so it’s about 17 minutes long.

Previous Post: The Lyft App: Your Guide to the Revamped Lyft Passenger App

Lyft Files For IPO, Lime Undefines, & Uber Looking For A Bird (Or Lime)?

Rideshare And Delivery Tips: Ways to Reduce Stress and Anxiety